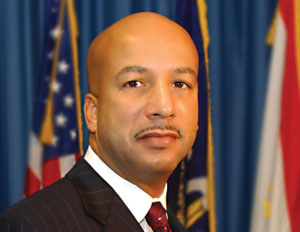 Ray Nagin the former mayor of New Orleans who became the face of the city after it got slammed by Hurricane Katrina back in 2005 has been sentenced to 10 years in prison by a federal court.

Nagin, a Democrat, was arrested in January last year, about three years after he left office. He was found guilty in February on 20 counts including fraud, bribery, and other charges relating to kickbacks from contractors looking for city work investigators say took place before and after Hurricane Katrina.

“A jury convicted Nagin of accepting hundreds of thousands of dollars in bribes —money, free vacation trips and truckloads of free granite for his family business —from businessmen who wanted work from the city or Nagin’s support for various hurricane recovery projects,” according to USAToday.com.

State calculations found Nagin’s cuts totaled about $500,000. Many of those involved in the cases against Nagin, eventually pleaded guilty and ended up testifying against him at his trial.

State prosecutors were pushing for the judge to send Nagin for a long time, stressing that he was found guilty of all but one of his indictments and orchestrated a year’s long cover up to enrich himself and his family. They also maintained he showed an “astounding unwillingness to accept any responsibility for his actions.”

Nagin’s defense attorney argued that as a first-time offender he deserved a lighter sentence. Several letters were sent to the judge in support of the former mayor, including from members of his family. His wife Seletha asked for Nagin to remain out of jail until all the allegations of misconduct are fully investigated.