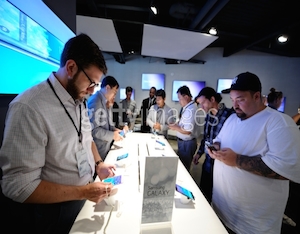 On Sept. 3, Samsung took over New York at an undisclosed location to present an evolved look at their latest mobile devices. I was able to participate in the unpacking of the Galaxy Note 4, the Galaxy Note Edge, and the unveiling of Samsung’s virtual reality unit — the Samsung Gear.

Upon my arrival, the word around the area was that Samsung had a powerful new experience to show off. Visuals already showed off an evolved S Pen and the masses were murmuring that they were going to beat Apple to the punch with a few new items. After a lengthy wait, the company showed off that they were indeed doubling down on their big phones (better known as ‘phablets’), clever design, and that the world could get their hands on two new versions of its popular Note series.

Before digging into that though, I have to say there were some things that I was disappointed in. First, Samsung trotted another version of their smart watch and it wasn’t impressive. Clunky and full of a whole lot of apps that people won’t really use, Samsung’s attempt will be thwarted whenever Apple decides to show off their debut smart watch. What is really cool is that the South Korean company is releasing two new versions of its popular Note series.

Now in its fourth installment, the Galaxy Note 4 is slimmed down from its bulky predecessor. Equally cool is that the Galaxy Note Edge will provide phablet fans with an innovative way to access information and engage with their mobile device. Available this coming fall, Samsung uniquely curved design allows quick access to frequently used apps, alerts and device functionality–even when the cover is closed–and all with the swipe of a thumb. It was cool to be able to stream videos on YouTube and still be able to navigate the phone without interrupting the clip.

Plus with colors such as “Charcoal Black,” “Frost White,” “Bronze Gold,” and “Blossom Pink,” users will be able to showcase their own style when the phablet hits select markets starting in October.

Check out more about my experience on the next page …