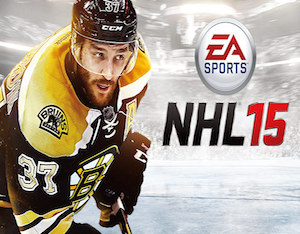 Yesterday, BlackEnterprise.com was on hand as EA Sports unveiled their latest NHL game to an enthusiastic audience in New York City. In addition to the launch, Boston Bruins forward Patrice Bergeron, who has competed for the Stanley Cup and in the Winter Olympics, was there to help EA show off by competing against one of his biggest fans. For those who don’t know anything about hockey, Bergeron is one of the strongest competitors in the entire NHL.

There were people from all over the city, from outside New York, and even journeying in from Canada to see this event and get hands-on with NHL ’15. NHL on NBC commentators Ed Olcyzk and Mike Emrick were present to serve as play callers when Bergeron would face his match in the form of 14-year-old super fan, Daniel Quigley. An avid supporter of the Boston Bruins, the New Jersey teen earned the right to battle Patrice one-on-one in the new game.

As video games become more and more lifelike, Bergeron and Quigley represented two differing sides of a gold coin. On one end, you had Bergeron, a former video game player who has dedicated his life to sports and being excellent. On the other, you have a diehard sports fan who plays the game to get closer to any action he can get. The Boston Bruins’ star was selected in an online vote which resulted in him featured on the cover of the game. “It was crazy. It was unbelievable, meeting Patrice Bergeron,” Quigley said to reporters after the 0-0 match between them. “Playing him in ‘NHL ’15’ was unreal. I should probably frame that [game] case that he signed.”

The match only went for two quarters because of time constraints. But broadcasters Emrick and Olcyzk’s colorful commentary allowed for all those in attendance to enjoy the match as it finished in a scoreless tie. EA Sports was able to unveil one of its more popular titles and even managed to give hardcore players free copies of the game. Olcyzk, a former player with the New York Rangers and Pittsburgh Penguins, joked about his thoughts involving the game. “What we hope is when people play the game and they hear us, they will hear a lot of the same things when we call games for ‘NHL on NBC’. If you watch the graphics, which are incredible, it’s just like how our producers would produce the game.”

While we were involved in the match, during the event you could feel the title hanging above each participant’s head. Bergeron, who already has an impressive list of team and individual accomplishments, was able to hold his own against the 14-year-old super fan. It was an enjoyable experience, and with the game now available in stores, it would only be right that we show off the title, which you can see by clicking here.