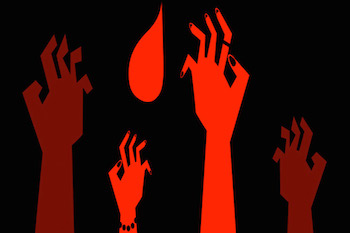 It marked my first time attending the event, as it would normally take place in the sunny beaches of Miami, Florida. Michelle Huff, Jeff Friday, and their remarkable team decided to bring the ABFF to New York City to touch all the tastemakers, influencers, and press right in their own backyard. Yours truly was a part of the mix, and I was excited to sit down with some of Hollywood’s living legends and developing talents.

With more than 52 films to screen, numerous Master Classes taught by Bill Duke and Robert Townsend, and a host of conversations to sit in on, this year’s ABFF was the go-to destination for those who love film or want to make their own film. While my aspirations are to do the latter, I am immersed in the former as well, so it was important to me to attend the festival’s closing as it marked the world premiere of Spike Lee’s latest joint.

“Da Sweet Blood of Jesus,” Spike’s first foray into crowdsourced filmmaking, was shrouded in secrecy. No trailer was given out to publications. Only the film’s two leading stars were announced to keep in line with 40 Acre and a Mule’s tradition of breaking new talent. Most notably, the project’s plot was simply described as “Human beings who are addicted to blood.” Adapted from the late Bill Gunn’s “Ganja & Hess,” the 1973 original film found a doctor’s assistant overwhelmed with an insatiable desire of blood after being stabbed with an ancient, germ-infested knife. With speculation about what Spike was really concocting, it’s no surprise that the School of Visual Arts theater was jammed pack in anticipation.

Read what happened upon my arrival on the next page…