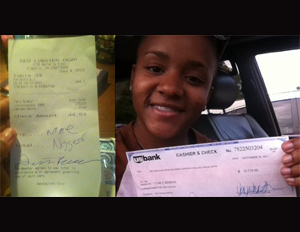 You only have to ask Toni Christina Jenkins a Red Lobster waitress in Franklin, Tennessee.

On September 7, 2013 Jenkins found a racist slur stating “none ni**er” on the receipt instead of a tip. Although it was against company policy, Jenkins posted the receipt on her Facebook page. Â According to a statement she made to ABC she wanted toÂ “create awareness that racism is still taking place in this generation.”

After posting the picture, Jenkins was suspended from her job for violating the policy of posting receipts online. After some time however she was invited back to her job and found out that an online fundraiser was able to raise over $10,000 for her with “Tips for Toni”. The fundraiser was started by Matthew Hanson of AddictingInfo.org.