Remember When We Were Sidekicks? – BLACK PANTHER and COMIC BOOK POLITICS 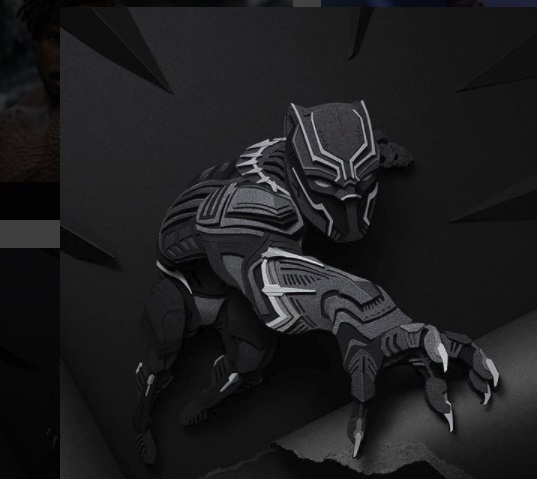 This isn’t so much a review as a reflection. It’s well documented how I feel about Black Panther. I pushed for Black Panther’s inclusion in the Avengers years ago. In April 2013, I wrote “It’s Time For Black Panther On The Big Screen.” If you’re just tuning in, you can look back through my archives for my previous Panther posts. Here’s Cary Darling’s Houston Chronicle article I was featured in “Houston fans are pumped for ‘Black Panther’ superhero movie with virtually all-African-American cast”

Black Panther was one of the best movie experiences of my life.

First, this film isn’t “homework.” Typically, movies featuring a black cast feel as if they need to instruct audiences about the ills of society past and present. Black creatives know we may never have the media mic again, so we don’t waste any moments. In my humble opinion, you’re grown, and it’s unrealistic to burden a mainstream movie with responsibility to make you a better person. That cake is baked. The only hope for a better tomorrow lies within the children. Which is why the stories they see and hear about heroic people that look like them, and don’t, are vital. Blissfully, there are no sermons in Black Panther. White colonizers never even knew the technocratic marvel of Wakanda existed, so Wakandan society flourished atop a mountain of the most precious metal on earth, unmolested.

But, to director Ryan Coogler’s and Marvel Studios’ credit, Black Panther doesn’t shy away one iota from speaking truth to power about the broader consequences of isolationism, classism or societal injustice. Thematically, the tone of the film is a tasty gumbo of an Aesop fable and James Bond political pot-boiler with a side of Game of Thrones court intrigue and a dash of hot sauce. The strongest nations throughout history learn the greatest threats are not from without but within; Wakanda is no different. No one can escape the consequences of the choices they’ve made, whomever you are, from a lowly orphan to a mighty King, to a nation of millions, as Malcom X said famously, “Your chickens will always come home to roost.”

There has been some buzz by angry white fanboys with absurd notions regarding Black Panther. They’ve declared comic book characters or stories must somehow be “apolitical”. And that the political agenda surrounding this film makes them “uncomfortable.”  (Aw, pobrecito!)

However, black folks continue to celebrate the creative, cultural and financial success of the only big budget comic book movie featuring a black cast and crew undeterred.

The tone-deaf reaction of some can be expected. Wonder Woman debuted to similar trolling about sexism (against men) and uproars about Alamo Drafthouse Theaters’ woman-only screeings. Racism, sexism and pop culture fandom aren’t mutually exclusive, in fact, any female, non-gender specific person, Bleek, cosplayer, collector, or actor of color can relay incidences of racism, sexisim or homophobia they’ve encountered. This harassment both online; like John Boyega for the crime of being a black stormtrooper in “The Force Awakens” or at cons where “Cosplay is not Consent” has to be repeatedly drummed into grabby Comic Con attendees.

I’ve been trolled by white men I don’t know from Adam with the caucasity to tell me I had “no right to speak about Black Panther because I’m not a real comic book fan.”  Now, not liking or even hating Black Panther doesn’t make you a racist. Telling me I can’t love it does. And using the fig leaf of “political agendas have no place in Comic Book Movies” to hide your bigotry only exposes your own political agenda.

As hard as it may be for you to believe, Jimothy, this movie isn’t about you…

White Supremacy is a Hell of a Drug

In his Forbes’ article chronicling Black Panther’s unprecedented success, Scott Mendelson (a white guy so you can trust him, Jimothy) titled “Box Office: ‘Black Panther’ Crushes Conventional Wisdom With Record $218M Debut” had this to say regarding Black Panther:

This isn’t just a blow to conventional wisdom about minority-led blockbusters, it’s a blow to conventional wisdom concerning the MCU. One of their more outside-the-box offerings, one of their most director-driven films and one of their most overtly political pictures yet, one that plays more like a drama than an action spectacular, is now on pace to be one of their very biggest movies. Like Pixar, I hope the MCU is realizing that its (stereotypically) riskiest bets turn out to be their biggest wins. Playing it safe is no longer the safe choice.”

Let’s talk a little about “politics in comics” before we move forward. Because this will come up more often as women, blacks, Asians, non-binary folks and others underserved in the pop media landscape take the lead on both sides of the camera and all phases of production in Hollywood. Let’s look at an example of how political thought not only has always been a part of comics, it grounds the greatest heroes and drives the best stories.

Captain America was created by cartoonists Joe Simon and Jack Kirby, his first appearance was Captain America Comics #1 published in 1941 by Timely Comics, a predecessor of Marvel Comics. Captain America was designed as a patriotic supersoldier who fought the Axis powers of World War II and was Timely Comics’ most popular character during the wartime period. Steve Rogers, “the skinny kid from Brooklyn” that became America’s enduring champion and the “First Avenger” in Marvels MCU, was 4F but wanted desperately to serve his country like his only childhood friend Sgt. Buchanan “Bucky” Barnes. Steve endured bullying with courage and tenacity, he knew what it meant to be powerless, which is why Dr. Erskine, the lead scientist of the super soldier program, believed Rogers was the ideal candidate.

Dr. Abraham Erskine: The serum amplifies everything that is inside. So, good becomes great. Bad becomes worse. This is why you were chosen. Because a strong man, who has known power all his life, will lose respect for that power. But a weak man knows the value of strength, and knows compassion.
Steve Rogers: Thanks. I think.
Dr. Abraham Erskine: [he pours two drinks] Whatever happens tomorrow, you must promise me one thing. That you will stay who you are. Not a perfect soldier, but a good man.”

Rogers, now a super soldier, dressed in red white & blue named Captain America quit touring with the USO selling war bonds, went to the front lines and punched Nazis in the face on a daily basis.

It’s endemic to who he is. Rogers believes in, if not America as it is, the aspirational ideal of what America SHOULD be for all her people. He’s such a patriot, once he leaned the truth about what the American government was doing in our name? He helped take down SHIELD, fought Iron Man, and became a fugitive from justice. Can you separate Captain America’s political views or core beliefs about freedom and justice from his character?

Of course not. Nor should you. That’s WHY we love Captain America. It’s what makes him a hero.

-Amnestic fanboys must have forgotten political stances made in The Avengers and all three Captain America Movies. SHIELD/HYDRA. Steve Rogers RAFT breakout after Civil War. The Sakovia Accords; UN oversight of “enhanced” individuals that split the Avengers. The political asylum granted by Wakanda. The entire X-Men comic run since Mutants were allegories of blacks during the Civil Rights Era of the 1960’s. MUTANT REGISTRATION ACT. TRASK Sentinel Program. The Legacy Virus that decimated fictional mutants concurrently during President Reagan’s silence on the spread of HIV in the 90’s that cost millions of real people their lives. Or, the second episode of Superfriends that spoke out against man-made climate change and promoted ocean conservation in the 1970’s.

I could go on.

Decades of the politics of the day driving comic book stories that no one cared about, that is, when blacks were sidekicks. This changed last Thursday.

Black Panther is a movie about the heir to the throne of a fictional African nation who wears the hereditary mantle of both monarch and protector of his realm “The Black Panther.” Is it possible to ignore or separate his blackness and his unique Afrocentric culture or world view from this character? Should every narrative he’s a part of ignore the plight of black people that do not enjoy the privilege of Wakandan citizenship?

One of the most powerful Black Panther comic book stories was the Jungle Action series of the seventies featuring Black Panther vs. The Ku Klux Klan. How do you de-politicize a black king taking on the the Klan? Why should we even want to? Like Cap’s political stance and core beliefs, Black Panther’s ethnicity & culture are central to his narrative and endemic to the character.

Black Panther is a powerful, resonant, self-reflective exercise that pays homage to both the source material and the African diaspora. It represents with unconditional love, deep respect, unique style, and an effortless flourish, yet still remembers to be a hell of a good time at the movies!

Black Panther was more than I could possibly ask for and one of the best examples of what a comic book movie can be. Period.

Editor’s Note: This article is excerpted from a longer piece. Read the article in its entirety at The Good Men Project