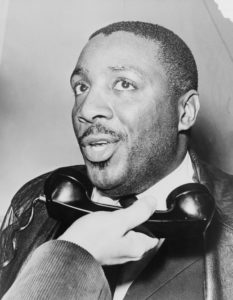 Iconic comedian and activist Dick Gregory passed away on Saturday at the age of 84. Beginning his career in 1953, Dick Gregory used his comedy to convey his political ideals to white and black audiences alike.

For instance, he spoke for two uninterrupted hours at “Freedom Day” in 1963, which was a rally to drive black voter registration. He also unsuccessfully ran for president of the United States in 1968 as a write-in candidate.

In the March 1989 issue of Black Enterprise magazine, it was reported that Gregory had amassed a “small fortune” from sales of his Slim-Safe product. That same year, he purchased a beachfront hotel in Florida for $7 million to use as a health, nutrition, and weight-loss center.

The hotel buy was part of the expansion of Dick Gregory Enterprises his business venture, which was averaging revenue of $30,000 per day just from Slim-Safe sales alone.

The hotel was part of Gregory’s vision to offer luxury accommodations to those who wanted to improve their health and nutrition.

“In order to reach Americans, you have to do it with glamour,” he said in an interview with Black Enterprise.  “I want to glamorize health and nutrition the same way we have [glamorized] athletics and sports.”

His business interests were fueled by a passion to see Americans, particularly black Americans, adopt a healthier lifestyle.

“We have got to make health an issue in America,” he said. “We have to make teenagers just as excited drinking juice as they are about buying a pair of Michael Jordan’s tennis shoes.”

“Dick Gregory was an activist and creative genius who knew the struggle for liberation could only take flight if prominent individuals like himself leveraged their considerable influence, and joined the masses on the front lines of the dismantling of Jim Crow,” said NAACP Board Chairman Leon W. Russell in a statement. “We have lost one of the most important voices of social justice vigilance in the last fifty years. His intellectual style of humor defied racist stereotypes, eschewed buffoonery, and provided white America rare insight into the unquestionable humanity of black people,” added Russell.

“Our brother in the struggle, Dick Gregory will be sorely missed,” said NAACP interim President Derrick Johnson. “He, along with people like Harry Belafonte and Paul Robeson, pioneered the use of celebrity as a tool to push for social justice. Our community and nation owes a great debt to him for his decades of work to eradicate racism.”