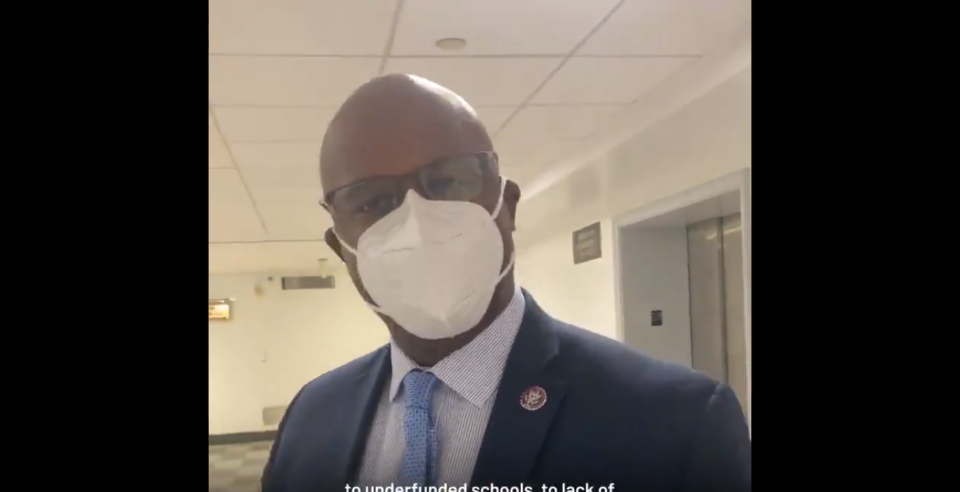 Democratic Rep. Jamaal Bowman talks to his fans while on his way to take his coronavirus vaccine shot. (Image: Twitter/@JamaalBowmanNY)

The longtime educator, who was sworn in Jan. 3, posted several videos on his personal and House of Representatives Twitter account, discussing the virus and the history of Black Americans and the U.S. medical industry.

Watch as Rep. Jamaal Bowman receives his COVID-19 vaccine and shares its significance for communities of color pic.twitter.com/xcxmB4ftxK

After receiving the shot, Bowman was surprised the shot did not hurt.

“I thought it was gonna hurt, too, but that actually wasn’t bad,” Bowman said. “Please get vaccinated, we gotta defeat this virus.”

Bowman admitted he was skeptical about taking the vaccine, but said Black Americans and minorities should overcome their fears.

“Like way too many people, I unfortunately don’t go to the doctor enough, and there’s a reason for that,” he said. “There’s historical distrust in terms of the medical community and the African-American community in particular. A lot of that distrust has seeped into me…it’s documented history, from Henrietta Lacks to the Tuskegee Experiment, to forced sterilization to the maternal morbidity and infant mortality rate to the comorbidities that currently exist, which leads to African-Americans being disproportionately impacted by COVID.”

Baseball legend Hank Aaron, who hit 755 home runs during his 21-year career, also received his first dose Tuesday and said he hopes taking the shot will encourage others to do the same.

I was proud to get the COVID-19 vaccine earlier today at Morehouse School of Medicine. I hope you do the same! https://t.co/RAlkmkCRra

“[Getting vaccinated] makes me feel wonderful,” Aaron told The Associated Press. “I don’t have any qualms about it at all, you know. I feel quite proud of myself for doing something like this. … It’s just a small thing that can help zillions of people in this country.”

Bowman and Aaron join Vice President-elect Kamala Harris, and Rep. Alexandria Ocasio Cortez (D-NY), as minorities who took the vaccine on TV.  With the new, more contagious strain now in multiple U.S. states, the vaccine is needed more than ever, but the rollout has been slow in the U.S.