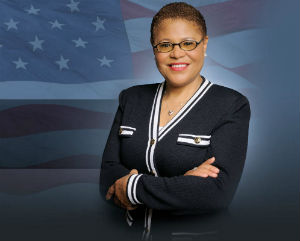 Congresswoman Karen Bass, U.S. Representative for California’s 33rd Congressional District, and founder and Co-Chair of the Congressional Caucus on Foster Youth, has vowed to crack down on the student loan debt crisis, saying that just because borrowers use loans to get an education doesn’t mean they should be saddled with a lifetime of debt.

“Last month marked the one year anniversary of student loan debt crossing the $1 trillion mark — making it second only to mortgage debt. Americans now owe more in student loan debt then credit card or automobile debt with the past 10 years showing a staggering 511 percent increase.

“Many have tried to down play these facts or flat out deny there is a student loan debt crisis. They argue borrowers should take personal responsibility for what they owe and not look for a bail out from the government.

“Borrowers should bear responsibility for their loan obligations but it’s just wrong to say there isn’t a crisis or to somehow suggest that because these Americans chose to get a good education they should be saddled with a lifetime of debt.”

Rep. Bass has introduced a bill that would forgive federal loan debt of up to $45,000, provided the borrower has made payments consistently. She’s also enlisted the help of celebrity financial guru Suze Orman, who supports the proposed legislation.