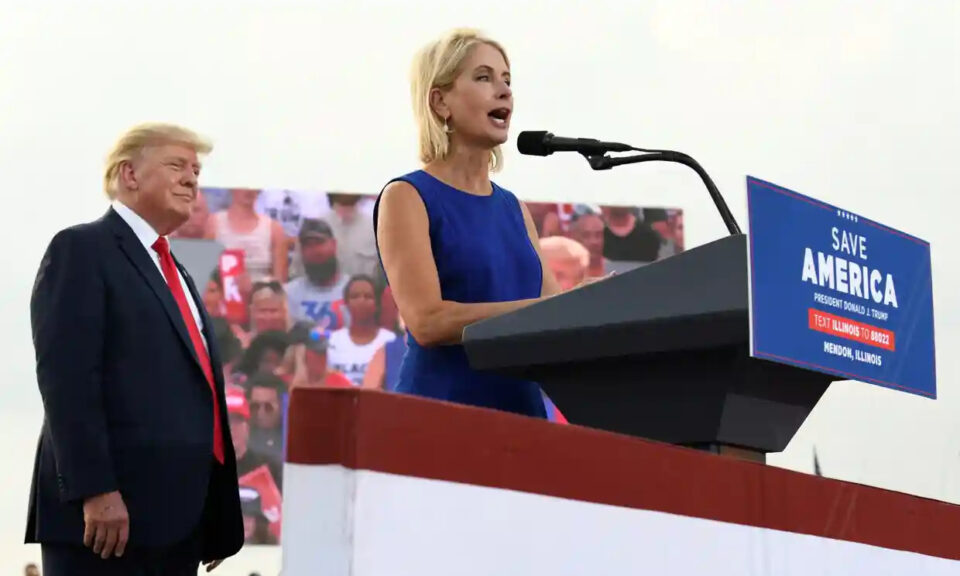 “President Trump, on behalf of all the MAGA patriots in America, I want to thank you for the historic victory for white life in the Supreme Court yesterday,” Miller said, then raised her hands to lead the crowd in a cheering clap.

Rep. Mary Miller said that “on behalf of the MAGA patriots in America,” she wanted to thank Trump “for the historic victory for white life in the Supreme Court.”

A spokesperson said she meant to say “right to life” but misspoke. https://t.co/cFQgCaNj8p pic.twitter.com/bxhyD8x5Yv

“She very clearly meant to say ‘victory for Right to Life’ during her remarks,” said campaign spokesperson Isaiah Wartman, adding that she misread the prepared remarks at the rally Trump held for her.

“To suggest that she is somehow not committed to defending all life is disgusting,” Wartman added.

Later, Miller tweeted: “I will always defend the RIGHT TO LIFE!”

I will always defend the RIGHT TO LIFE! pic.twitter.com/BUh5vnk5Vs

Following Miller’s statement, social media was in an uproar. Users believed that the congresswoman elected in 2020 meant exactly what she said despite reading off of a prepared speech. Some even called the “misspoke” statement a “Freudian slip.” Others referenced the moment when Miller quoted Hitler in a speech.

Nope- she said exactly what she meant. “I mis-spoke” is code for “I forgot the lie I was supposed to tell you”. https://t.co/jeacahHjR1

That racist saltine came right out and said it https://t.co/M91ABHUtmV

This is awful! Clearly she was thinking about whiteness in the first place. Also noticed that she was reading from a script. I wonder what it said? Knowing what was publicly said, they just smiled and moved on. That is not showing remorse for their mistake https://t.co/KWjI9hzcUh

“Misspoke”, my ass. The fundamental reason for this decision is white supremacy. https://t.co/CMtGphsOyM

“It was a Freudian slip not prepared remarks,” is not the defense she thinks it is https://t.co/Jnw8zBrC1r

This is the same rep who said Hitler was right about educating the youth. https://t.co/ec8PZOKnme