Rep. Maxine Waters Made Sure A Black Man Arrested By Police Was Safe 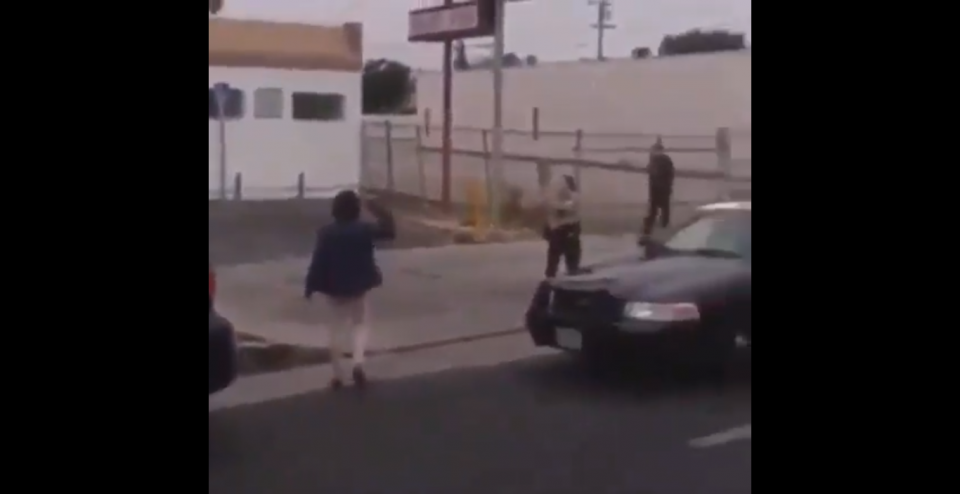 Rep. Maxine Waters walks up to a cop last weekend after they detained a Black man. Image: Twitter/@TheMauriceAsh.

Rep. Maxine Waters was all over social media over the weekend for ensuring a Black man was safe after he was detained by police in her L.A. district.

According to Madame Noire, Waters (D-Calif.), who was driving around, saw several cops from the Los Angeles County Sheriff’s Office who stopped a Black motorist. Waters immediately pulled her car over and began approaching the police to make sure there was no foul play.

“They stopped a brother, so I stopped to see what they were doing,” Waters, 81, says to the individual recording the incident which took place on Friday, according to TMZ. The car was stopped on South Vermont Avenue in Los Angeles.

The police, seemingly unfazed by Water’s appearance, told her if she didn’t leave she would get a ticket because of where she stopped her car. Water’s responded to the cameraman as she walked back to her car.

“They said I’m in the wrong place and that they’re going to give me a ticket,” she adds in reference to the LA County sheriff’s deputies who can be seen in the frame.“That’s OK as long as I watch them.”

“You gotta do what you gotta do,” another woman says off-camera.

“I will,” Waters responds.

In May, actor Denzel Washington dealt with a similar situation when he encountered a distressed man on the street in L.A. and stayed when officers arrived to make sure the man was OK.

Maxine Waters has become a fan favorite of young and old protesters across the country due to her battles with President Trump and the Republican Party and her ability to tell them exactly how she feels. In March, Waters wrote a series of tweets slamming the president for his response to the coronavirus pandemic, which has led to an economic depression and more than 120,000 citizens dying.

Waters, who has served as the U.S. Representative for California’s 43rd congressional district since 1991, also commented on the passing of Rep. John Lewis saying “his image, his knowledge and understanding of what democracy is all about should be remembered by everybody because of the work that he has done.”