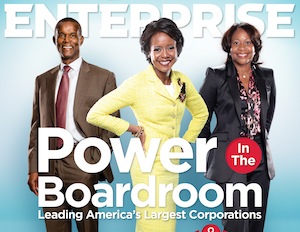 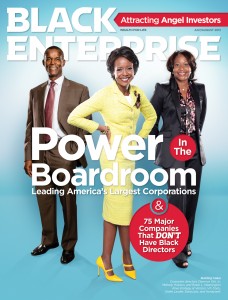 The registry and report can be found at BlackEnterprise.com via the following link: http://www.blackenterprise.com/tag/black-corporate-directors/. The report, “Directing America’s Largest Corporations,â€ is also featured as the cover story in the latest issue of BLACK ENTERPRISE Magazine. Social media content and conversation around African American directors on corporate boards can be find via the hash tag #BlacksOnBoards on Twitter and other social media sites.

“Our report highlights the achievements of exemplary African American board members at our nation’s largest corporations,â€ says BLACK ENTERPRISE CEO Earl “Butchâ€ Graves Jr. “They are among the guardians of shareholder value who are ensuring the continued viability of American industry, including trillions of dollars in assets and millions of managers, employees, suppliers and other corporate stakeholders.â€

“It should be equally alarming to us that in 2013, 30% of the 250 largest corporations do not currently have a single African American director despite the fact that many of these companies enjoy tremendous market share from African American consumers,â€ says Graves, who serves on the board of Memphis, Tenn.-based Auto Zone. “It is our duty to challenge those corporations and ask them why. As corporate directors and shareholders of our nation’s largest companies, it is our collective responsibility to hold corporate America accountable and ensure that African Americans are never marginalized or overlooked.â€

The registry is drawn from a universe of the 250 largest companies on the S&P 500 based on market capitalization as of June 14, 2013. BLACK ENTERPRISE compiled the listing by reviewing proxy statements and annual reports, as well as contacting investor relations departments, corporate governance experts, and organizations such as the Black Corporate Directors Conference and Executive Leadership Council (ELC); the latter is a network of the nation’s most highly ranked African American corporate executives.

“African Americans were the only group that experienced a decline [in board representation], says Ronald C. Parker, president and CEO of the ELC, a member of the Alliance. “You have the recognition of other diverse groups out there–women, in particular, Latinos, Asians. Our database shows that from 2011 to 2012, there were 56 board seat openings–and most went to white women.â€