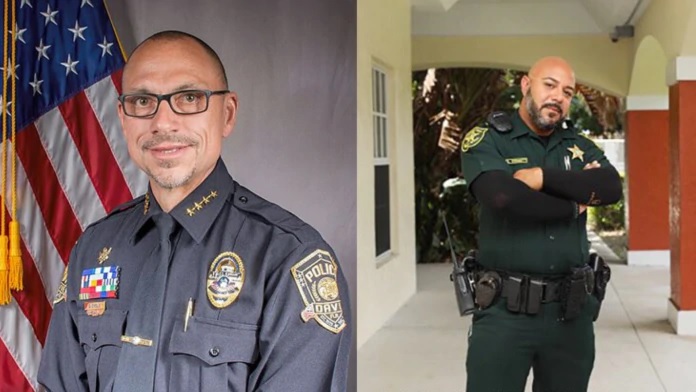 A Florida police chief is under fire because he stated that a police officer died from the coronavirus because he was gay, according to The Grio.

Dale Engle, the police chief in Davie, FL, a town of 106,000 residents west of Fort Lauderdale, was placed on administrative leave over the weekend “pending further review of allegations brought forward by the Fraternal Order of Police,” the town administrator, Richard J. Lemack, stated.

As posted on the Town of Davie Facebook page, “As of April 11, 2020, Police Chief Dale Engle was placed on administrative leave pending further review of allegations brought forward by the Fraternal Order of Police. The allegations will be investigated in accordance with the Town’s Equal Employment Opportunity compliance policy by outside counsel. The Town will have no further comment until the investigation is completed to protect the integrity of all involved.”

According to The Miami Herald, a complaint written by Mike Tucker, the chief of staff for the Florida State Fraternal Order of Police, said Engle “belittled” officers in a parking lot who expressed concern about the coronavirus last week. When his officers raised concerns about the dangers of catching the coronavirus, he downplayed the concerns and claimed a Broward County deputy’s COVID-19 death was caused by his “homosexual” lifestyle, the officers alleged.

“Chief Engle allegedly yelled about a ‘backstory’ which proclaimed that Deputy Shannon Bennett contracted and died from the virus because he was a ‘homosexual who attended homosexual sexual events,’” the complaint read, according to the Herald.

“He intimated that it was because of the homosexual lifestyle that Deputy Bennett first contracted a serious underlying disease which aggravated the COVID-19 virus and lead to his death,” the complaint read.

The complaint said Engle continued to “rant” for some time, with the “presumable desired effect of intimidating the members and discouraging any other department employees from complaining or expressing concerns in the future.”

If these allegations are true, the disgusting insinuation made by Chief Engle is not becoming of the badge he wears. He should be stripped of his rank for making such divisive comments that do not reflect the inclusive values of America’s law enforcement.https://t.co/sDSjyBelzy