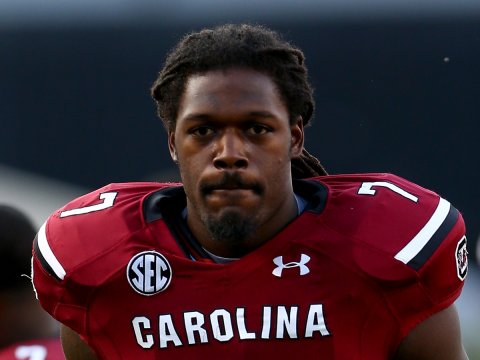 “Jadeveon Clowney you coming with me.”

At least that’s what it appears Jay Z will be able rap … if a new Yahoo! report is accurate.

Yahoo! Sports’ Rand Getlin cites an unnamed source that says Clowney is leaning toward signing with Roc Nation Sports. Weeks ago, Clowney posted a picture on his Instagram captioned, “You kno we about to turn up. Dream coming true.” It was a picture of an article discussing the mutual interest of both parties.

Clowney has already been publicly linked to Jay Z, whose given name is Shawn Carter. A July report in “Inside The League” indicated Clowney was “smitten” with the superstar rapper-turned-sports agent and that the two had been in “regular contact under the guise of the rapper recruiting him for his marketing potential.”

Clowney has struggled this year, and has been hampered by injury — with just two sacks through nine games. Roc Nation’s Kim Miale represents Jets rookie quarterback Geno Smith. It was unclear if she would also represent Clowney in contract negotiations with his NFL team.