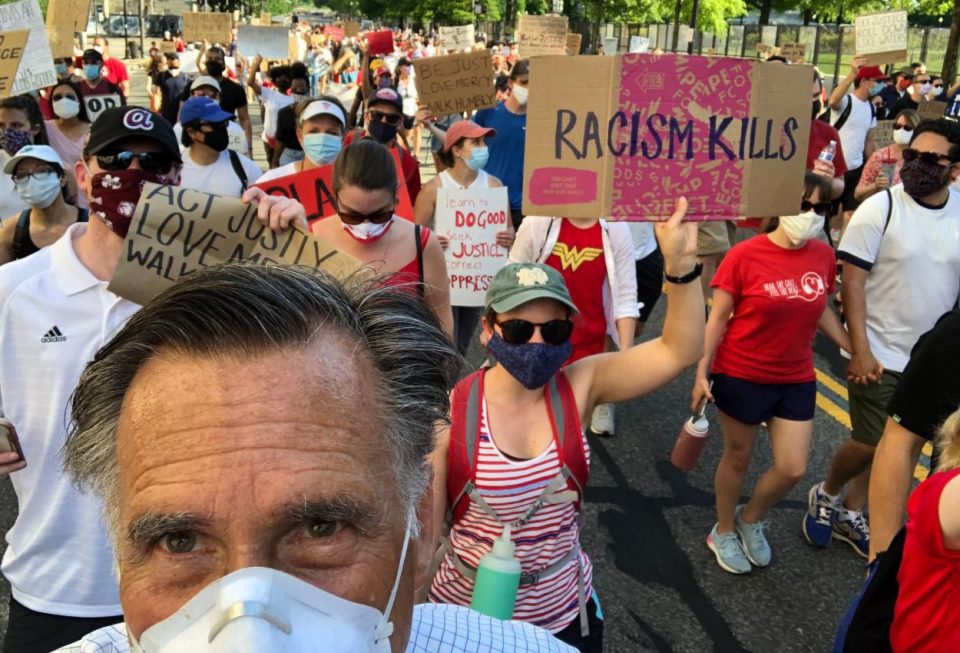 Mitt Romney takes a selfie in front of a large mix of people at a BLM protest (Image: Twitter)

Republican Sen. Mitt Romney took to the streets over the weekend to join people speaking out against police brutality and racial injustice at a Black Lives Matter protest, according to The Associated Press.

Romney, who is one of President Donald Trump‘s biggest critics, made an appearance Sunday at a Washington D.C. protest marching alongside a Christian group. The former presidential candidate is the first reported Republican senator to join the rally of people fighting for police reform and changes in the treatment of blacks by law enforcement.

“We need a voice against racism, we need many voices against racism and against brutality,” he said. “We need to stand up and say, ‘Black lives matter.’ ” Romney told NBC News that he needed to be there.

No Americans should fear enmity and harm from those sworn to protect us. The death of George Floyd must not be in vain: Our shock and outrage must grow into collective determination to extinguish forever such racist abuse.

The George Floyd murder is abhorrent. Peaceful protests underscore the urgency of addressing injustices. But violence drowns the message of the protestors and mocks the principles of justice.

The Utah senator also showed a photo of his father, George Romney, marching in a civil rights march in the late 1960s in Detroit.

This is my father, George Romney, participating in a Civil Rights march in the Detroit suburbs during the late 1960s—“Force alone will not eliminate riots,” he said. “We must eliminate the problems from which they stem.” pic.twitter.com/SzrcAyfPD8

Romney, who has been fiercely critical of President Trump, was the only Republican senator who cast a vote for impeachment at the president’s impeachment hearing last year. President Obama based parts of his healthcare reform, the Patient Protection and Affordable Care Act, better known as the American Care Act, on Romney’s healthcare bill, nicknamed Romneycare.