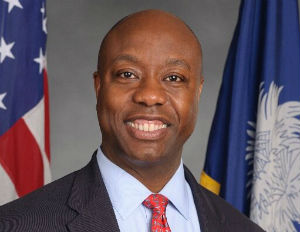 South Carolina’s Tim Scott on Tuesday became the first African-American senator to win election in the South since Reconstruction (specifically, since 1881). Scott’s win also made him the first African-American in U.S. history to be elected to both the House and the Senate. He discussed the historic moment in a series of election-night tweets, including one that stated: “In South Carolina, in America, it takes a generation to go from having a grandfather who is picking cotton, to a grandson in Congress.â€ In another tweet, he stated: “We are thankful for those trailblazers who came before us and said the status quo was not enough. I stand on the shoulders of giants.â€

Scott, 49, was raised in a single parent household in North Charleston. He served one term in the South Carolina General Assembly from 2009 to 2011. Prior to that, he had been on the Charleston County City Council from 1996 to 2008. A Republican, Scott was elected to the U.S. House of Representatives in 2010. The first Republican African-American Congressman from South Carolina since 1897, Scott is characterized as a fiscal and cultural conservative.

He was appointed by Governor Nikki Haley to the office after former Sen. Jim DeMint resigned in November 2012. In this year’s midterms, he outlasted Democratic challenger Joyce Dickerson. The election was only to fill the last two years of DeMint’s term. Scott will have to run again in 2016 in order to earn a full six-year term.

As a freshman Senator, Scott was named to five committees, including the Committee on Commerce, Science, & Transportation; the Committee on Health, Education, Labor, & Pensions; the Committee on Energy and Natural Resources; the Special Committee on Aging; and the Small Business Committee. Additionally, he serves as the top Republican at the Commerce Subcommittee on Competitiveness, Innovation, and Export Promotion, which works to ensure America remains the best place in the world to do business.

On key issues, Scott believes that federal spending and taxes should be reduced, advocates the repeal of the 2010 health care reform law, opposes same-sex marriage, and supports the rights of workers. His “Opportunity Agenda” focus on education and job training.