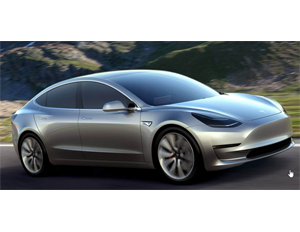 Tesla announced on Thursday that its most affordable vehicle to date, the Model 3, is available for reservation.

[Related: Toyota’s Latest Futuristic Car is Made of Wood]

The Model 3’s starting price is $35,000. The Model 3 is an electric vehicle and gets 215 miles of range per charge. It does zero to 60 mph in less than 6 seconds, according to the manufacturer. It’s a sedan with seating for up to five adults comfortably.

The vehicle also has Autopilot hardware features as standard, according to Tech Insider. These are autonomous features which allow the Model 3 to steer itself, change lanes, avoid obstacles, and self-park.

The Model 3 has both front and rear trunks and is touted as having unprecedented roominess for a sedan of its size. At the Model 3 Unveil Event on Thursday at the Tesla Design Studio in Hawthorne, Calif., Tesla Motors CEO, Elon Musk, spoke of the important of electric cars.

“It’s very important to accelerate the transition to sustainable transport…really important for the future of the world,â€ said Musk.

Musk spoke about the first Tesla car, the Roadster. “Tesla Roadster was the first really great electric car—fast, beautiful, great performance…â€ The car was not widely available because Tesla made only 500 units per year. Musk said that the precursors to the Model 3, the Model S and Model X, paved the way for the development of the Model 3, which will be Tesla’s first mass-produced vehicle.

The Tesla CEO also promoted the Model 3’s safety calling it “Five stars in every category,â€ as well as its speed.

“Even the base Model 3 does 0 to 60 mph in less than 6 seconds. At Tesla, we don’t make slow cars. There will be versions of the Model 3 that go much faster,” Musk said.

The Model 3 uses Supercharging, a faster-charging method than the “destination chargingâ€ that most electric cars support.