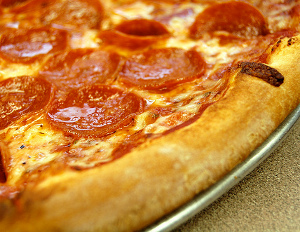 In 2011, the staff of Ruggles, a restaurant in Houston, Texas, walked out and shut down the restaurant alleging non-payment of tips from management.

Jermiah Villarreal, who worked at the restaurant, told the Houston Press, “Half the time we got [paid] it was just out of desperation. We were fed up and upset and complaining that we had no money for our bills and needed it.â€

Ruggles owner Bruce Molzan said after going through payroll records, he discovered he owed his waitstaff around $14,000 to $15,000 in back wages, and promised to pay this amount in full.

A group of 25 protestors, mostly former Ruggles workers who still have yet to receive their back pay have been picketing Bruce Molzan’s new restaurant, Corner Table. Molzan sent pizzas out to the protesters as a peace offering because he didn’t want the scene to turn “ugly.” Protestors rejected the pies and began chanting: “No food; pay me!â€ in response to the free pies.

Molzan has a long track record of fighting with employees over unpaid wages. He told the Houston Chronicle that a manager was responsible for withholding payments. He also accused the manager in a lawsuit of stealing cash and deleting computer files. The manager, James Wray, denied the allegation and said he was never allowed to pay waiters without Molzan’s approval.