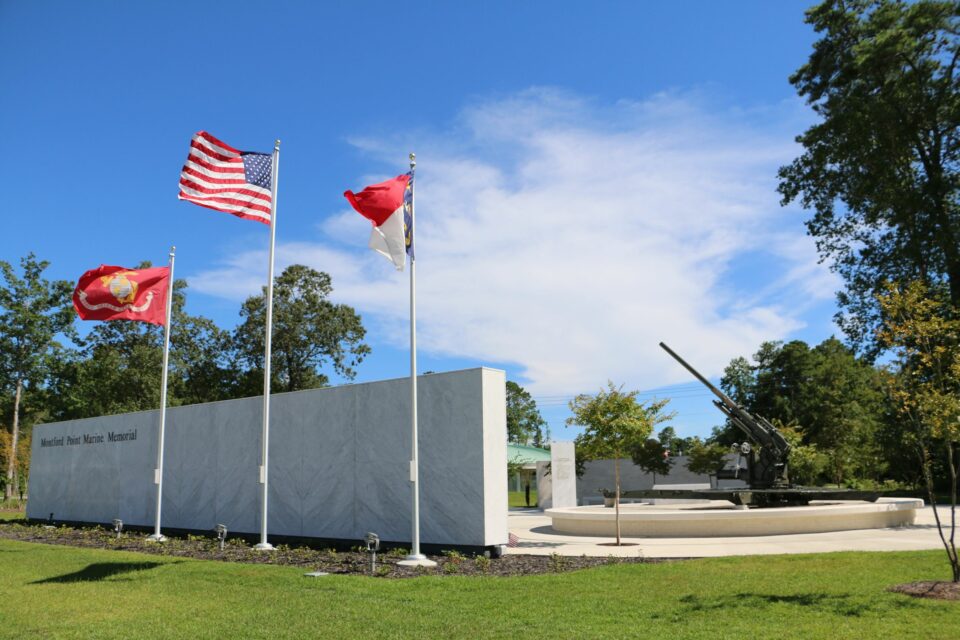 A project started in 2019 to restore key buildings at Montford Point, used by the first Black Marines and protect the structures from the effects of climate change — is nearly complete. (Image: Twitter)

A project to restore key buildings at Montford Point, where the first Black Marines trained, is near completion.

WBUR reports during the 1940s, 20,000 Black men trained under harsh conditions at a racially segregated military base in North Carolina known as Montford Point. Today, the camp is part of Camp Lejeune, the main Marine  Corps infantry base for the East Coast, and is called Camp Johnson, named after one of those first Black Marines, Sgt. Maj. Gilbert “Hashmark” Johnson, who was a drill instructor.

Many of the men who used the buildings have passed, but some of the 300 surviving Montford Point Marines came back to the base in April for the reopening of the newly-restored museum honoring them in what was once the mess hall.

One of the men who attended, Retired First Sgt. William McDowell, who goes by Jack, flew in from Long Beach, California, telling WBUR the restoration is important to the Marines and the nation.

“I’m not one to dwell on the past; on the other hand, I think for historical purposes and educational purposes, it’s a good idea to keep in the minds of folks the way things used to be and the way they are now,” McDowell said. “There was a time when the Marine Corps would have rather the fact that it was racially segregated was forgotten about.”

Montford Point Marine Association officials say they worked closely with the Corps while planning key details of the restoration project, including what buildings to save. Additionally, the Navy and Marines worked with the North Carolina Historic Preservation Office on the nature of the restoration.

The restoration plan will save and renovate five buildings, including a headquarters building, a gym, and a museum. The camp’s chapel, which was badly damaged, will be entirely rebuilt.

“The ability to renovate these buildings was taken holistically, not only as an opportunity to bring it up to the current mission set, but also to look at resiliency from the complete spectrum,” said Navy Commander Ross Campbell, who doubles as Camp Lejeune’s Public Works Officer. “Not only storm, climate change, but energy efficiency and building efficiency, and building health as far as indoor air quality.”

Carroll Braxton, 97, a retired master gunnery sergeant from Virginia, still remembers what it was like in those barracks and on the base, saying the verbal and physical abuse they dealt with seemed endless, but today those same men are recognized for their efforts in the face of racism and segregation.