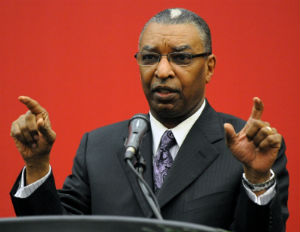 He’s a leather vest, boots-and-motorcycle-jacket-wearing minister at least part of the time.

That’s because while Reverend DeForest Soaries is a nationally renowned clergyman, author and thought leader he’s also a man on a mission to help transform an at-risk community, which means he tends to meet members of his congregation where they are.

On June 30th where they’ll be is the First Baptist Church of Lincoln Gardens where Soaries serves as senior pastor. There he’ll help preside over an annual “Biker Blessingâ€ — a rally of more than 1,000 black male motorcycle riders converging on the small New Jersey town of Somerset from Virginia, Maryland, Connecticut, New York and other states throughout the East Coast. In addition to showcasing their motorcycle stunts, offering free food as well as financial literacy and health workshops, the cyclists, church and neighboring community groups will seek to raise awareness about gun violence in Somerset and surrounding cities.

“Like any neighborhood [Somerset] has had its exposure to violence,â€ explains Soaries, who presides over a congregation of more than 7,000 and says he’s expecting between 500 to 600 people at the event. “A gathering like this is important because it emphasizes the strength of a community — our ability to govern ourselves,â€ he asserts. “Our theme this year is gun violence,â€ he says, with a nod to Newtown, the Mother’s Day parade shooting in New Orleans and the ongoing campaign of violence in Chicago. “All of our cyclists will talk to the young people about participating in community activities and avoiding gangs, and encourage them to go to school.â€

Soaries – a former New Jersey Secretary of State – has long worked to help better the state’s neighborhoods, and not only just attempting to rid them of weapons. Currently, the director of the Federal Home Loan Bank of New York and the Independence Realty Trust in Philadelphia, he is also the CEO of the Central Jersey Community Development, one of the state’s most comprehensive and holistically-run community development organizations.

“Back in the early 90s when we started this work we called it ‘faith-based community development,â€ says Soaries, “and we continue to stick to a plan to revitalize our neighborhoods. Since then we have seen a tremendous growth in local jobs as well as new affordable housing for senior citizens,â€ he says. “New Jersey is one of the most expensive places in the world to live, and so we partnered with a private African American developer and are in the process of building 64 housing units for senior citizens. In addition to homes there will be offices that provide social services so that anyone in the neighborhood who needs access — Medicaid, health or other government benefits – can go there and talk to a caseworker,â€ he adds. “We think the job of the church whenever possible is to encourage African American entrepreneurship.â€

It is also to encourage parishioners to become debt-free. The author of “dfree: Breaking Free from Financial Slavery,â€ Soaries, who was featured on CNN’s Black in America documentary “Almighty Debt,â€ has also promoted a national anti-payday loan campaign with the goal of educating the public about predatory lenders that charge borrowers 300 — 800% interest on short-term loans. In addition he’s sought to mobilize a grass-roots effort to oppose predatory lending practices.

“These are all ways to help the economic base of our community,â€ he explains. “Being more strategic with our money is our only way to get free.â€