REVIEW: Ava DuVernay's 'Selma' Is Timely, Engaging And A Must See

[REVIEW] Ava DuVernay’s ‘Selma’ Is Timely, Engaging And A Must See 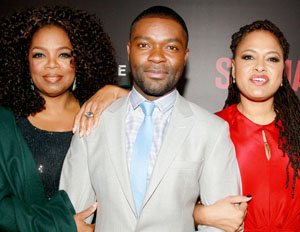 In Oscar Wilde’s 1889 essay, The Decay of Lying, he wrote, “Life imitates art far more than art imitates life.â€ For Ava DuVernay’s timely historical drama, Selma, it is an unnervingly surreal experience that places the viewer in the thick of a tumultuous point within American history.

The film, which stars David Oyelowo (Instellar, The Butler) and Carmen Ejogo as Martin Luther King Jr. and Coretta Scott King, chronicles the couple’s interpersonal relationship during the three-month period where the activist fought for equal voting rights in Selma and Montgomery, Alabama. The ensemble cast empowers this stunning picture, which is one of the year’s best films and explores the roots of racism within America’s gilded cage.

The film illuminates just how far the Nobel Peace Prize winner went to advocate his non-violent message. In one particular scene—when King first arrives in Selma—natives of both races are watching him very closely. As he checks into the hotel, a white patron calls for King’s attention, unafraid, King answers and swiftly receives a five-fingered welcome to the face. Staggered, but unphased, King remarks to Rev. Ralph Abernathy, played by Colman Domingo, “That white boy can hit,â€ and thus jumpstarts the conversation on how complex the subject of race truly is.

Selma, which was written by DuVernay and Paul Webb, pegs the Civil Rights leader as a great man, one with flaws, doubts, secrets, and justified fears. From start to finish, the project depicts how the road to change and equality was a daunting task that only the willing were able to traverse. One inclined person who was ready to stand and make a difference was Annie Lee Cooper (portrayed by Oprah Winfrey), who lived in Selma before, during, and after the protests. Best known for punching Sheriff Jim Clark in order to stop from being abused by his billy club, Winfrey showcases the grit and fortitude throughout the picture necessary to stand up to such abuse.

For King, his team, and his supporters – debates frequently arise as to how to make a difference amidst all the chaos. From arguments with the Student Nonviolent Coordinating Committee to terse discussions with President Lyndon B. Johnson (Tom Wilkinson), the march served as the deliberate and pertinent chess move that would galvanize the globe around the issues of racism and disenfranchisement against people of color. DuVernay’s previous film, Middle of Nowhere tackled this similar mix of the political and personal, as Martin and Coretta clash in their relationship as the movement gains momentum. But while that film was excellent in and of itself, Selma ups the ante through stark realism and inflammatory rhetoric.

Watch the trailer on the next page …