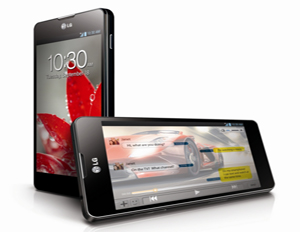 Even as the Apple iPhone 5 steals the smartphone headlines, LG and HTC, two leading cell phone makers, fired off loud salvos of their own by rolling out muscle-bound units with big screens, impressive sound and high-resolution cameras: The LG Optimus G and HTC Windows Phone 8X and Windows Phone 8S.

Introduced within hours of each other, the LG Optimus G, which uses Google’s icon-based Android 4.0 operating system (OS), and the HTC Windows Phone 8X and HTC Windows Phone 8S, which run Microsoft’s new tile-based Windows Phone 8 OS, serve as reminders that there are plenty of choices in the power-smartphone market beyond the iPhone.

With Microsoft CEO Steve Ballmer in attendance, the HTC Windows Phone 8X (4.3-inch display) and HTC Windows Phone 8S (4-inch screen) were knighted as “the signature phones of Windows 8â€ during a New York product launch event. That’s an interesting coup for HTC since competitors such as Nokia are also rolling out Windows Phone 8-based units.

“We now have a front camera that’s more than just an afterthought,â€ said Croyle.

The new HTC phones also have audio amplifiers which boost the audio sent to headsets or to the phones’ built-in speakers and both phones incorporate Beats Audio, which enhances bass and treble and the overall richness of the sound. The units will be available in November from T-Mobile, Verizon Wireless and AT&T Wireless. No pricing was announced.

While the HTC units focus on style, sound and imaging, the LG Optimus G, the first to use Qualcomm’s new quad-core Snapdragon S4 Pro processor, is a true muscle smartphone. The quad-core processor allows it to perform high-demand tasks such as zooming in on a video as it plays.

The LG Optimus G has a large, 4.7-inch, 1,280-by-768-pixel display, a tablet-like 32 gigabytes (GB) of user memory and a 2,100mAH battery which promises 15 hours of talk time and about two weeks of standby time. The super-high-resolution 13-megapixel rear camera and 1.3-megapixel front-facing camera can take pictures with a simple command like “Cheese!â€

The enhanced user interface allows users to perform multiple tasks at once such as wirelessly streaming a video to an external monitor while a presentation plays on the phone. The unit can also display the full screen of two tasks at the same time–no flipping between apps is necessary. A QuickMemo function lets users draw on a screen capture of a Web page and then share it with others, complete a live link to the URL of the web page.

The LG Optimus G will reach stores in October, but here again no pricing was announced.