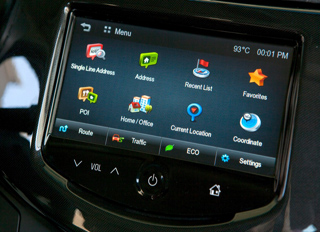 In-car GPS navigation systems have become the go-to option for car buyers ready to venture out on the roads–without getting lost, of course. However, during the past few years, the added cost–nav systems can place an additional $2500 to the cost of a vehicle–and higher depreciation rates for built-in automobile navigation on used cars have made drivers question their decision to invest in the additional purchase.

Automakers and satellite navigation (sat nav) companies have responded to consumers’ changing tastes by developing what some are calling “Bring Your Own Navigation,â€ or BYON, which essentially utilizes the GPS capabilities of your smartphone in lieu of a built-in navigation unit.

That option has numerous advantages including the ability to employ familiar technology and forgoing the hassle of costly upgrades. Smartphone integration “is [a] smart way to provide navigation in a way that our customers are comfortable with,â€ said General Motors Global Program Manager Sara LeBlanc. “It gives our customers the safety and functionality of a more expensive navigation system at a much more reasonable cost.â€

The market is heating up with both Ford and Chevrolet introducing integrated smartphone navigation systems this year, while traditional GPS manufacturers such as TomTom are making it easier to add their systems into your driving experience via your mobile device.

Ford has partnered with Telenav, Inc. to bring enhanced navigation to its popular SYNC platform. Utilizing a smartphone application, its Scout for SYNC app brings route navigation that is individually tailored to a driver’s daily commute. In addition, the service will provide voice-activated information like directions and local search, among other things, as well as speed camera alerts. The daily personal navigator will be offered as an upgrade to current SYNC-capable 2012 and 2013 Ford models, including Fiesta, Focus, Fusion, and Mustang, and is an affordable option at only $24.99 a year, or $4.99 a month. The service is available for Android users through Verizon, AT&T and Sprint.

Chevrolet takes the BYON concept a step further with their latest BringGo app, launching on 2013 Spark and Sonic models. Utilizing an in-dash, 7-inch display, BringGo resembles a traditional nav system; however, all of the hard work is being powered by the smartphone. The service provides 3-D maps and real-time traffic information, in addition to running integrated apps such as Pandora and Slacker Radio. Priced at around $50, it stands to save consumers thousands of dollars as it rolls out across the GM lineup.

Not to be outdone, traditional GPS manufacturers such as TomTom and Garmin have stepped up their smartphone applications, and both Google and now Apple are offering native turn-by-turn navigation. TomTom’s navigation app for iPhone and Android, priced at $39.99, brings their native turn-by-turn offerings to mobile devices. Paired with the TomTom mobile phone dock and charger ($39.99), it is still a great option for those drivers who want maximum portability at a fraction of the cost.

So is there a winner here? It’s hard to tell. TomTom’s service is the most portable, while Ford’s offerings are more scalable, and Chevrolet’s BringGo bridges the best of in-dash navigation with smartphone convenience. What we can conclude is that traditional in-dash navigation (in addition to portable GPS systems) is out the door as smartphone technology gets increasingly more sophisticated and accessible.