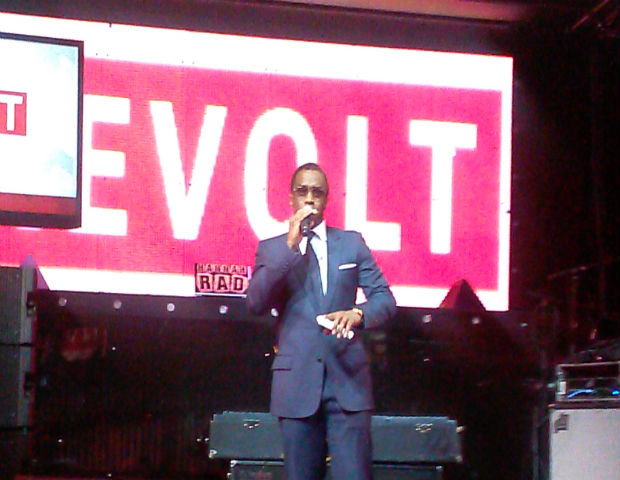 Dropping out of a prestigious HBCU, Howard University, to take a career leap into the music business.

Rebounding after the loss of a hip-hop icon, top superstar and best friend, a major criminal case and fiscal ups and downs of a tough industry.

Expanding a music label into a global multimedia entertainment, marketing and fashion brand.

Launching the careers and collaborating with the who’s who of hip-hop, R&B and Hollywood.

Many of us already know Sean “Diddy” Combs’ stellar resume and career, but beyond that, if you can’t find inspiration for boss moves from someone like him, I suggest you peak out from under that rock and check your email.

Last night, Combs helmed a celebration and upfront event, giving media, entertainment and music industry influencers a peak into Revolt TV branding and programming. Network talent, management and staff shared initiatives the network is implementing and its plans for the future of television, touting an approach to music journalism likened to CNN and ESPN.

Executives from the network, including CEO Keith Clinkscales and Val Boreland, vice president of programming and production, talked about where Revolt TV plans to take entertainment media, while network talent, including Power 1o5’s “The Breakfast Club” cast gave the audience a preview of what’s in store for what may soon be viewer favorites and contenders for top ratings.

Three prevalent themes of the night, echoed by not only Combs, but Revolt TV executives and management, embodied the core principles that drive successful boss moves and innovation in today’s business world.

Take a few cues from Diddy’s Revolt revolution with these key insights gathered from the night:

1. Millennials aren’t just entitled underachievers. They’re drivers of dynamic change—and bankability— and thus should be embraced and supported. After more than 20 years in the business, Combs remains on the pulse of industry trends by tapping into the power of young professionals. He actually joked about “not saying [the word] millennials anymore,” but was adamant about his support and employment of millennial talent. “You can’t do this without a team. I have this incredible team of young people,” he said at the upfront. “I had this staff meeting…and we have about 300 employees… and the diversity … the total complexity of the staff… These kids are the future. … Some graduated from college. Some didn’t. Some are interns… Â For some, it’s their first time working in television, but they know music… the most powerful way of communicating globally.”

(A recent Forbes co-signed Combs’ continued commitment in driving the career starts of young talent in a recent feature that got first-person insight from millennial employees at Revolt, reflecting how Combs takes a hands-on, inclusive approach to working with them.)

2. Knowledge—and fearless embracing–of disruptive innovation is golden and can lead to lucrative results. “We’ve come to be disruptive in this industry,” Combs said. “We’ve come to make noise, and we’ve come to be the new No. 1 name in music. This is one step to achieving that goal.” Revolt stands as a network with the freedom of not facing the same scrutiny as public competitors (ie. MTV) who have already been in the space—since it’s a private company, for now—thus it can create unique branding and capitalize on a market that is just a fearless, diverse and green. Also, the network has already attracted major sponsorship and the attention of a crowd that’s not easy to hold in terms of attention. We millennials respect companies that epitomize effortless cool, engage us in real time, and offer something that will not only compete against the already-existing noise, but navigate and innovate within it.

3. Good relationship-building is the cornerstone of career longevity. Who wouldn’t want music industry leaders and icons like Russell Simmons and Andre Harrell showing support for their latest business venture? They were both in the building for the event, with Harrell addressing the audience touting Revolt’s offerings. Revolt TV has already secured features and broken news with vets Jay Z, Beyonce, Eminem and Ice Cube, as well as young stars including Childish Gambino, Wiz Khalifa, A$AP Rocky and SchoolBoy Q. Successful innovators surround themselves with leading industry peers and build relationships with industry innovators. This is a tried-and-true part of business and professional success.