"Ride Along 2" is a Comedy-Filled Road Trip 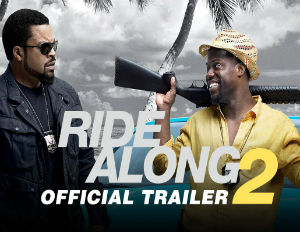 There’s a drug ring going on in Miami. A detective and a cop are on the case–piecing together evidence, witnesses, and using their gut instincts to figure out who’s the drug lord and how many criminals are involved. Between foot chases, fast cars, fist fights, and undercover work, these two officers are determined to crack the case and make a big arrest that will shut down the drug ring.

The two officers are celebrities and the chases and fights are well rehearsed. Why? Because this is the premise of a Hollywood movie. Ride Along 2, starring Ice Cube and Kevin Hart, hit theaters Friday, January 15. The mega-stars reunite for this comedy-packed sequel that takes us for a ride as James Payton (Ice Cube) and Ben Barber (Kevin Hart) keep us in stitches with their love/hate relationship.

Much like the first Ride Along movie, Ben is extremely curious about law enforcement and eager to become a detective (or at least to portray one) like his soon-to-be brother-in-law, James. Although James is reluctant to include the clueless and obnoxious Ben in his police work, he’s determined to keep his fiancÃ©e Angela (Tika Sumpter), who’s Ben’s sister, happy, so he allows Ben to participate in yet another ride along.

Here is where the comedy kicks in. This movie has all the right elements to make it a hit. In all actuality, it’s like a spin on the movie Bad Boys featuring Will Smith and Martin Lawrence, with the huge exception that these two main characters are the unlikely “coupleâ€ and their antics almost “spoofâ€ cop films. Between Hart’s sharp and witty lines and Ice Cube’s stern and no-nonsense attitude, Ride Along 2 keeps audiences laughing–even during its more serious scenes.

The plot has several stories. First, Angela and James are a week away from their nuptials. It’s a highly stressful time for both of them, especially James, who discovers he has to travel from Atlanta to Miami to crack a case. Then there’s Angela, Ben’s sister. She’s protective of her excessively playful and sometimes naÃ¯ve brother. She wants her brother and her fiancÃ© to bond, which makes it easier for James to be included in the family (and we know how in-laws can be). So she’s constantly urging James to be more “openâ€ to Ben and his police antics. And of course there’s James and Ben–the main characters who can’t stand each other but need to make it work to further their personal agenda. For James, it’s to keep his fiancÃ©e happy and gain acceptance from her family. And for Ben, it’s to learn how to be a detective and transition from a beat cop to an actual detective.

The first Ride Along movie introduced Ice Cube and Kevin Hart as a comedic pair playing off their stark differences in size, attitude, and personality. This is what keeps the audience engaged. You can count on Ice Cube to portray a more serious and down-to-earth role while Hart consistently catches viewers off-guard with his facial expressions, ad-libs, and quick delivery.

These two leading guys are able to hold their own, but what’s a good movie without a good woman to balance all of that testosterone? Tika Sumpter, who also plays Candace Young on the infamous TV drama The Haves and the Have Nots, adds charisma and spunk to the cast and tries to keep the two main characters in check. “The thing that I like about my character, Angela, is that she’s pretty consistent. She’s consistent in who she is and the fact that she wants more out of life and also wants to be the steady hand in both of her relationships.â€ Sumpter’s character is a woman who is able to motivate the two men who adore her to work together and learn to accept each other personally and professionally.