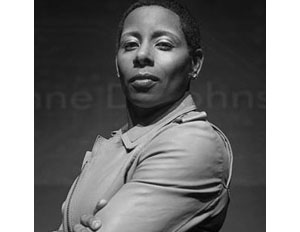 Lynne d Johnson is a respected tech evangelist and digital content creator. She has contributed to some of the most well-known sites on the web including Vibe, Spin, and Fast Company.

Johnson was featured in AT&T’s “Seeing Starsâ€ campaign; a celebration of tech innovators and thought leaders in the digital space.

Her achievements haveÂ been acknowledged by industry peers. She was awarded an MVMT 50 Top 10 Innovators award in 2015 at SXSW Interactive and was also the recipient of the 2006 Black Weblog Awards Black Blogger Achievement award.

Johnson often speaks on technology, innovation, and content creation. She is a frequent guest on the widely viewed web-based TWIT TV series This Week In Google. She has keynoted and presented at many conferences including PRSA Digital Impact, Web 2.0 Expo, and AdTech.

Currently, Johnson contributes to Ebony.com, writing about technology and diversity in tech. She also serves as a consultant and adjunct professor.

Her poetry and essays are included in anthologies, as well as in many print and digital publications. She holds a Bachelor of Arts degree in Journalism from SUNY New Paltz, an Advanced Certificate in Multicultural Studies from The College of Mount Saint Vincent, and a Master of Business Administration degree in Media Management from Metropolitan College of New York.

Johnson will moderate a powerful panel at Black Enterprise’s TechConneXt tech summit featuring other accomplished women in the STEM and tech industries including acclaimed physicist Dr. Hadiyah-Nicole Green. The panel focuses on theÂ challenges of being both a woman and a person of color in industries often unwelcoming to both and how to meet those challenges to success.