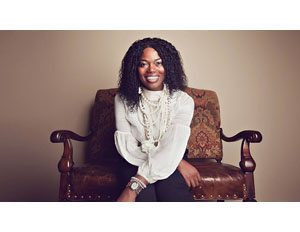 Spio is a deep space engineer who honed her skills as a wideband/satellite communications technician in the United States Air Force. She worked on high-tech systems including digital microwave radios, high and low-speed digital multiplexers, fiber-optic communications sets, and encrypted devices.

Today, Spio is the founder of Ceek VR Inc.–a platform that brings social events to life through virtual reality, using any VR headset and one single app, the Ceek VR app.

Born in Syracuse, NY, but raised in Ghana, Spio obtained a Masters Â in electrical engineering and computer science from Georgia Institute of Technology and earned a Bachelor of Science in Electrical Engineering degreeÂ from Syracuse University. She is the recipient of the prestigious Yueh-Ying Hu Memorial National Award for Innovation and the Boeing Outstanding Achievement in Electrical Engineering Award.

Yet, it’s not as though success comes effortlessly to this talented woman. She faces the same challenges of most black female entrepreneurs.

“…more than 97% of the billions of venture funding went to companies with male CEOs; leaving a mere 3% in funding for women-headed companies. This hits very close to home for me. People are shocked when they learn of the difficulty I’m having getting my companyÂ  CEEK VR funded, in spite of the fact that we are a revenue generating virtual reality distribution platform used by industry giants such as Universal Music, Nicklaus Children’s Hospital, Berkshire Hathaway’s Richline just to name a few.”

Despite it all,Â she thrives. She further advises about launching a successful business venture as a woman of color, “I’m not suggesting that it’s impossible. It takes longer to break through the wall than to walk through the door. It is only through deliberate, proactive linkages that we will change behaviors and ultimately mindsets

Engineers and other STEM professionals will lend thier vast insight and experiences to attendees at Black Enterprise‘s TechConneXt Technology Summit.

6 Essential Keys to Not Drown at Work

How to Really Make Your Pitch Stick and Story Resonate