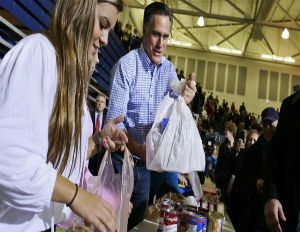 Last year, when he was campaigning for the GOP nomination, presidential hopeful Mitt Romney seemed to suggest in a debate that the FederalÂ Emergency Management Agency (FEMA) should be shut down because it cost too much money, and that the states should be left to fend for themselves in disasters—small government and all that.

Regarding FEMA Romney said back then: “We cannot afford to do those things without jeopardizing the future for our kids. It is simply immoral, in my view, for us to continue to rack up larger and larger debts and pass them on to our kids.â€

Yesterday, less than a week before Election Day and with thousands needing assistance for temporary housing and help with house repairsÂ in Hurricane Sandy’s wake, Romney’s campaign is saying to voters that his administration will assist disaster victims.

“I believe that FEMA plays a key role in working with states and localities to prepare for and respond to natural disasters…..As president, I will ensure FEMA has the funding it needs to fulfill its mission, while directing maximum resources to the first responders who work tirelessly to help those in need, because states and localities are in the best position to get aid to the individuals and communities affected by natural disasters.â€

He didn’t comment on whetherÂ help for disaster victims would be funded by cutting other programs in the federal budget, as people like his running mate, Paul Ryan suggest.