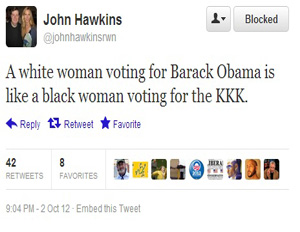 On the cusp of yesterday’s debate a story is going viral about a tweet from a contributor to Mitt Romney’s campaign blog. Contributor John Hawkins, tweeted “A White Woman Voting for Barack Obama is like a black woman voting for the KKK.”

Hawkins is a writer for the conservative TownHall.com. His comments elicited startled replies from his followers.