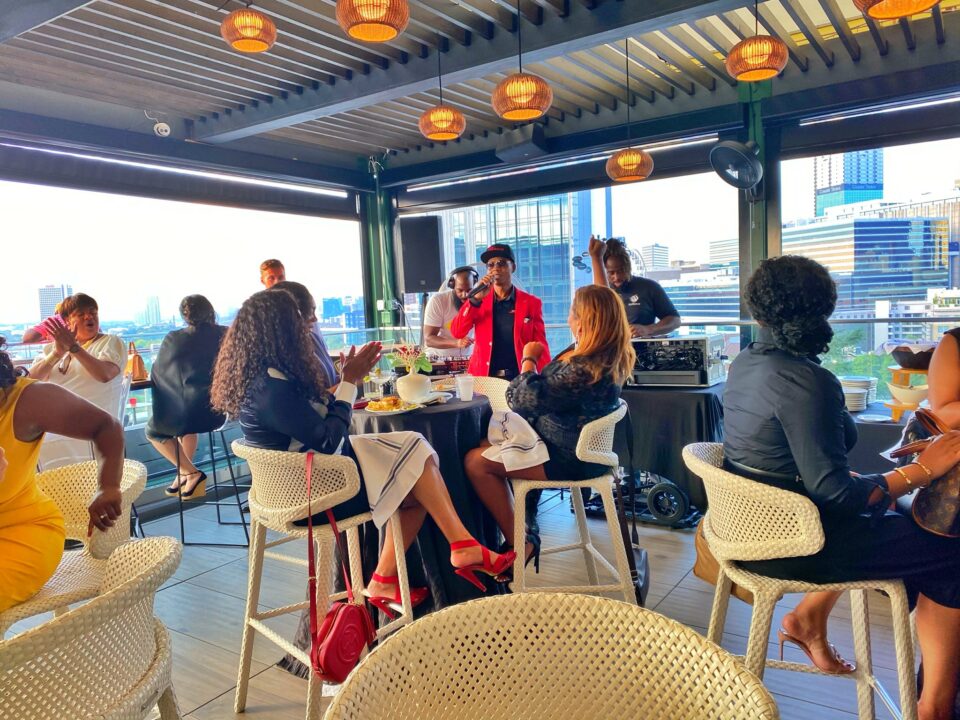 Ronnie DeVoe, the CEO of DeVoe Real Estate, and a member of the legendary groups BBD and New Edition, announced on Thursday that he is set to lead legions of Black Americans on the path to homeownership through a new partnership with the National Fair Housing Alliance (NFHA).

DeVoe made the announcement during an exclusive gathering at the Glenn Hotel in Atlanta, Georgia, on Thursday night. DeVoe Real Estate will join NFHA on a nationwide tour to promote the “Keys Unlock Dreams Initiative” (KUDI).

Joining DeVoe were real estate industry leaders, including  Marvetta Bozeman, Broker and director of operations of DeVoe Real Estate, Felicia Gentry, an eXp Realty agent in Texas, and Lisa Rice, president and CEO of the National Fair Housing Alliance, among a host of real estate agents and other guests.

DeVoe Real Estate not only committed to join the National Fair Housing Alliance on this ambitious program but DeVoe is also aligning his firm with eXp, one of the world’s fastest-growing real estate global brokerage firms.

“By doing this, DeVoe Real Estate will be able to recruit like-minded agents from around the nation who are also committed to this movement,” said Bozeman.

The crux of the partnership is to advance workable solutions to eliminate the racial, wealth and homeownership gaps. Although DeVoe experienced much financial success as part of the iconic musical groups Bell, Biv, DeVoe and New Edition, he also said he’s experienced financial challenges and struggles of losing two homes.

“I had to drive my U-haul from California to Atlanta,” because of financial woes he said on Thursday.

He says in 2002, “there was a lull in New Edition’s career.” With money scarce, he admits that he had to also file bankruptcy. “They didn’t have that in the New Edition story,” he joked.

“That’s another layer right there. I had it all but I was humbled to lose it all, including the second home I purchased.”

He said he moved to Atlanta with hopes that the “Black mecca” would be the promised land for Black people.

DeVoe said he got into real estate and “it changed my life.” Including a chance meeting with Bozeman that has ultimately turned into a fast friendship that has helped drive the success of his business, he said.

Through this movement, the agents that DeVoe Real Estate recruits will have to align with the agency and “must share the same passion that we do on helping to spread the word of FAIR and EQUAL housing,” Bozeman added.

“We desire agents who care just as much about educating potential clients as they do their commission,” she said.

“Education is key to becoming a homeowner. Many people in the Black community don’t know where to start or they simply don’t believe homeownership is for them. We are using our personal connections, banking partnerships, and educational resources to provide the community with the tools they need to make their dreams of homeownership a reality,” Bozeman explained.

The partnership with NFHA will foster the goals set by DeVoe Real Estate. And because of its extensive reach with policy leaders, financial institutions, and the overwhelming amount of research it has on the housing crisis in the Black community, DeVoe Real Estate is positioned to hit the ground running with the KUDI initiative.

“One of the challenges that we face, we all know that we’re in a midst of a health pandemic, the COVID crisis and we see everyday in the news how this pandemic, this coronavirus, is disproportionately impacting African American, Latinos, Native Americans and other people of color,” said Rice, president and CEO of NFHA, at the gathering on Thursday. “Not just in terms of health but in terms of housing stability as well.”

Widening the net through DeVoe Real Estate’s expansion with eXp

“We have the largest numbers of Black real estate agents under one brokerage in the United States,” said Gentry, an eXp Realty agent in Texas, and co-chair and one of the original founders of ONE eXp, eXp Realty’s initiative for diversity and inclusion.

eXp is one of the world’s fastest-growing real estate brokerages. Founded in 2009, it now has offices in 14 countries around the world with a community of over 60,000 real estate professionals, all connected through the unique cloud-based platform, eXp World.

Gentry continued, “And the vision that was given to me is that we are here to educate, provide awareness, training. My job and my commission is to get real estate agents educated and trained to be prepared to go out into the streets to help our community. A lot of times we’re underprepared,” she admitted. “A lot of times we’re playing chess and checkers and our counterparts are doing Xbox.”

Gentry who spoke at DeVoe’s exclusive event, set forth an ambitious mission for Black agents.

“Our mission is to have 100,000 agents, $1 billion in earning commission and revenues for the company, for ourselves in 10 years. That is the vision of Black agents and allies so we can serve people not only in the United States, but around the world.”

For the Keys Unlock Dreams and the National Fair Housing Alliance click here.

FacebookTwitterYoutube
← Ava DuVernay: ‘Trying to Create a Show for LeVar Burton to Host and Make an International Hit’ ← Debbie Allen to Receive Governors Award at 2021 Emmys
×