The Roots Picnic: A Lesson On Longevity and Industry Relationships 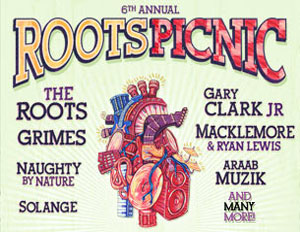 The Roots have been at it for more than 20 years and are still able to move crowds and gain the support of their hometown of Philadelphia. This weekend, they headlined their annual picnic, in its sixth year, where they brought out an eclectic mix of artists and bands including Trinidad James, Solange, Macklemoore and Naughty By Nature. As I witnessed awesome live music—something that is becoming a dying aspect of the music industry — I couldn’t help but put my boss moves hat on (as corny as that might sound. I mean, in my world, there’s a boss-moves lesson in almost everything.)

Though I enjoyed the show (and the up-close-and-personal backstage glance at Treach, who’s still as handsome and talented as he was when the group first hit the scene in the ’90s), here are a few boss-moves takeaways on longevity and stellar branding:

1. Think outside the box when it comes to exposure. Just looking at the diverse roster of talent, one should note that these artists (or their management) not only know the value of exposure but also recognize that great things can happen when you step outside what you may be used to (or what others may be used to in terms of your lane.) To have longevity in an industry, one must constantly reinvent and diversify what they offer and to whom. The Roots, particularly, have been able to do that, consistently touring and performing to audiences around the world. And I don’t think putting themselves in one box or category— or restricting their leverage or exposure—would have taken them far. If you’re always thinking linear, you may not be destined for exemplary success. Get out of your comfort zone and do things that maybe others aren’t doing–things that are unique and different—especially in comparison to the norm of your industry. You don’t have to go totally left with every boss move you make, but be sure you’re not hindering opportunities by being afraid or unwilling to push boundaries.

2. Good relationships DO make the world go ’round. During the concert, the Roots brought out award-winning songwriter and singer Marsha Ambrosius to sing the hook on their popular hit “You Got Me.” She adds to the hook legacy of phenom songtresses including Erykah Badu and Jill Scott. Naughty by Nature’s set was anchored by The Roots as their band for hits including “Hip Hop Hooray.” And popular hip-hop artist Meek Mill, who’s also from Philly, took to the stage for a surprise performance. None of this happens without good relationship-building. There are plenty of musicians, singers and artists looking for big breaks, but oftentimes, from what I’ve seen, it’s those who have built solid relationships within the industry who win and truly stand the test of time. Being a young professional affords you the opportunity to start fresh and gives you the time to make great first impressions and connections. Use that to your advantage and you’ll see that, down the road, you’ll have a solid foundation and network to stand on.

3. Support your roots (pun intended) and you’ll reap major rewards. The Roots are Philly’s music ambassadors, called by Mayor Michael Nutter “the world’s house band.” They even have a mural in their honor and have been a major part of philanthropic community efforts supporting youth and the arts. In return, their concerts are promoted and supported by the city as well as its residents, allowing them to leverage a resource they are not only more than familiar with but can relate to. Leaders often find joy in giving back and know the value of doing so in terms of the success of their brands and future boss moves. So, when you’re looking for opportunities, look in your own backyard. Build solid relationships with the people around you at this moment. You can work smart by networking in a realm you’re already familiar with, while at the same time doing good.