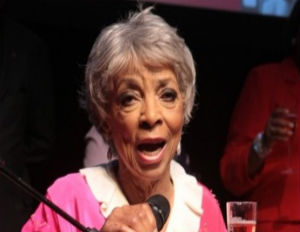 Actor, activist and living legend Ruby Dee celebrated her 90th birthday at Harlem’s Schomburg Center with family, (famous) friends and fans on Wednesday night. Her grandson Muta’Ali, shared with the crowd a clip of the documentary he’s working on about Ruby Dee (he calls her Gram Ruby) and her late husband Ossie Davis.

Flanked by friends and family on stage, Ruby Dee danced and clapped along to Stevie Wonder’s “My Cherie Amourâ€ before being serenaded with “Happy Birthdayâ€ and blowing out the candle on her cake shaped like a giant cupcake.

Many of Ruby Dee’s famous friends attended and participated in the event. Among them were Harry Belafonte, Rosie O’Donnell, Susan Taylor, Danny Glover, Charles S. Dutton, Courtney Vance and Angela Bassett, who read a special birthday message from President Barack Obama. Bassett said that Ruby Dee was her first inspiration to become an actor.

Many more people sent their birthday messages by video.

“You are the greatest actor in the world, Ruby Dee. You’ve made me a better actor and a better person just from being in your presence,â€ said Hill Harper via video message.

Clad in a festive pink outfit, Ruby Dee addressed the crowd saying “Nothing is beyond our capacity to realize. Our job for this lifetime is to understand who we are. We are the God stuff. Let’s get busy.â€

Guests were treated to champagne and cupcakes by Dimples , greeting cards by Birthmark Cards in gift bags and live music, all provided by members of Ruby Dee’s extended family. Celebrating their matriarch and exposing their products to potential new customers? That sounds like a great idea.

Head to Ebony.com for more pictures from the celebration.