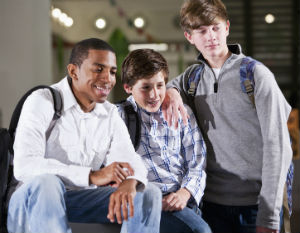 Could run-down, dilapidated school buildings be aÂ cause of low test scores?

A study by a Cornell University environmental psychologist suggests they are.

According to the study, the demoralizing conditions caused the children to stay home and, as a consequence, reduce their learning time.

According to a release from Cornell University, Maxwell’s study found that poor building conditions “accounted for 70% of poor academic performance.â€

In an earlier, related study, one middle school boy had told Maxwell, “Well, maybe if the school looked better, kids would want to come to school.â€

The Buildings Are Beautiful

When I asked her why independent schooling works, one of the first things she mentioned was the beautiful, awe-inspiring campuses. The stateliness and grandeur of the school buildings inspire a sense of seriousness. “Learning is important,â€ the buildings themselves seem to say.

Buildings should absolutely be considered an important part of helping low-income children succeed. The atrocious conditions in Detroit’s public schools made national headlines earlier this year. But shiny new buildings aren’t a silver bullet, and I am concerned that policymakers could think that simply replacing shabby school buildings is the way to improve academic performance.

Wendy Kopp, founder of Teach for America and co-founder and CEO of Teach for All, writes in her book, A Chance to Make History, about a brand-new Philadelphia school that cost $62 million (in 2006). A lot of money was poured into the school’s design, but it’s not clear that the weightier matters were considered–the things that must be in place to improve academic performance.

In 2009, the school’s test scores were lower than those of other local schools. (The school’s writing scores were higher, however.) When Kopp visited, she saw a loud-talking teacher and utterly distracted students. There was little engagement–in a $62 million building.

No child in America should be learning in a school with leaking toilets, mold, or cracking plaster. (Perhaps a study could be done to assess what percentage of low test scores could be attributed to being taught by demoralized teachers that must work in such unsafe environments.)

These buildings need to be replaced, but we can’t stop there.