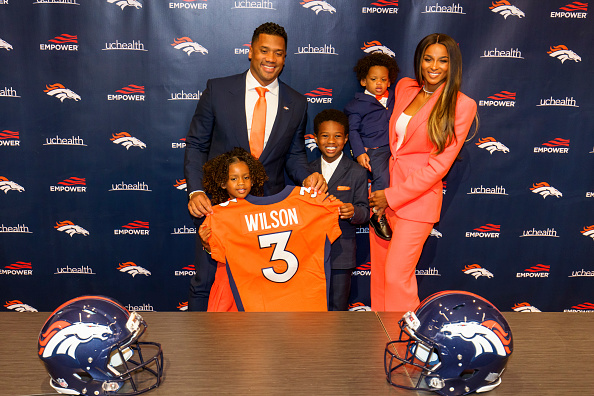 According to ESPN, Russell Wilson has reached an agreement with the Denver Broncos worth $245 million. Wilson, who the Seattle Seahawks traded last March, agreed to a five-year extension with the team that guarantees the quarterback $165 million.

The Broncos’ General Manager, George Paton, reportedly had the goal of signing Wilson to a long-term extension, and the new deal is one of the most lucrative contracts in NFL history.

Wilson shared the news on Instagram with a photo of himself signing the deal. He also included several pictures with his family, including his wife, singer Ciara.

“There’s No Body like You God! There will NEVER be!”

ESPN also shared the news on Twitter with the caption, “Breaking: The Broncos and Russell Wilson just reached an agreement on a five-year, $245M contract extension that includes $165M guaranteed, sources told @AdamSchefter. The deal ties Wilson to Denver for seven total years and $296M.”

The deal ties Wilson to Denver for seven total years and $296M. pic.twitter.com/lR7MFxL0PO

During a press conference on Sept. 1, Paton said he wanted to seal the deal before the midnight deadline.

“It came down to the wire last night,” said Paton. “We had a deadline. I felt we would figure it out, but you never know. We’ve never done a deal together… I went home last night. It was like 11:30 and I hadn’t heard anything. . . . I fell asleep, then the phone rang… It was a FaceTime. It was Russ and Ciara. I couldn’t figure out the phone, so I lost them. I was like, ‘Are they going to ask for more money? What are they doing?’ They called again and I answered, and it was one of the best phone calls I’ve ever received. Ciara, Russ and even Mark was on the call. It was pretty cool stuff and I’ll remember that. That’s the best I’ve felt after a deal.”

The deal extends Wilson’s time as a Denver Bronco through the 2028 season. Wilson’s first game of the season will be on Sept. 12, and it should be an interesting game as he will be playing against his former team, the Seattle Seahawks. Wilson led the Seahawks to victory during the Super Bowl XLVIII in 2014 against the Denver Broncos.