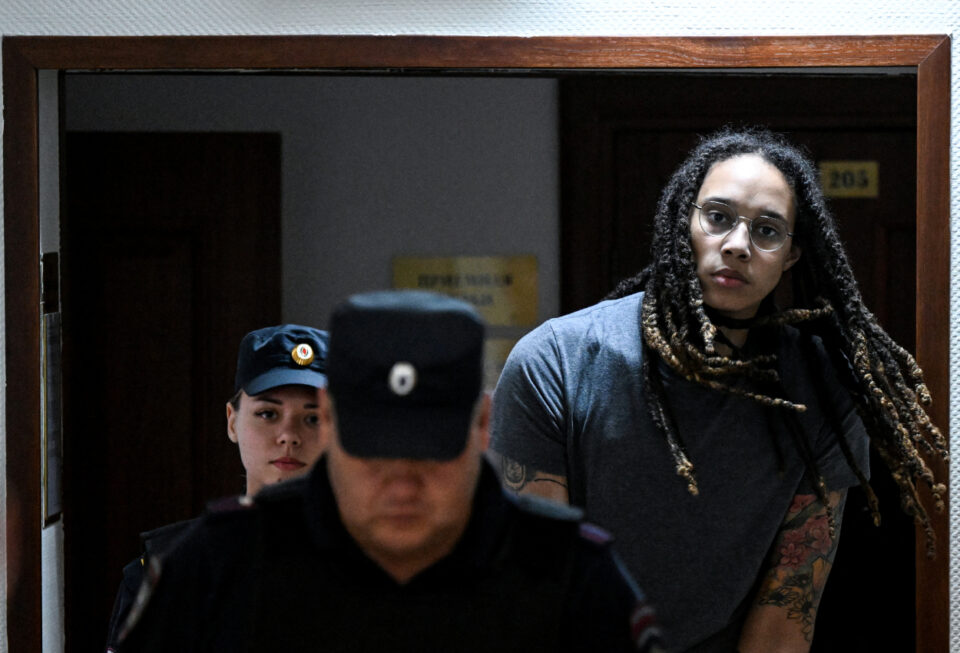 U.S. basketball player Brittney Griner, who was detained at Moscow's Sheremetyevo airport and later charged with illegal possession of cannabis, is escorted in a court building in Khimki outside Moscow, Russia August 4, 2022. Kirill Kudryavtsev/Pool via REUTERS

Following the 9-year sentencing of WNBA star Brittney Griner, Russia said on Friday that they are “ready to discuss” a prisoner swap with the U.S. government.

The White House reportedly has pressed the former Soviet country in an offer to release Griner along with former U.S. Marine Paul Whelan, who was convicted in 2018 for 16 years on espionage charges, reports CBS News.

According to state news RIA Novosti, Russia’s foreign minister Sergey Lavrov said their government is “ready to discuss this topic, but within the framework of the channel that has been agreed by the presidents,” during a press conference at the Association of Southeast Asian Nations summit in Cambodia.

“There is a special channel established by [Russian President Vladimir Putin and U.S. President Joe Biden] and despite certain public declarations, it is still functional,” Lavrov added.

Additionally, he mentioned Griner’s sentencing exposed the “Russian government’s use of wrongful detentions to advance its own agenda using individuals as political pawns.”

As previously reported, Griner was sentenced to nearly 10 years in prison on Aug. 4 by a Russian court in Moscow, and could serve her time in a penal colony.

Following the verdict, Biden released a statement, saying, “Russia is wrongfully detaining Brittney. It’s unacceptable, and I call on Russia to release her immediately so she can be with her wife, loved ones, friends, and teammates. My administration will continue to work tirelessly and pursue every possible avenue to bring Brittney and Paul Whelan home safely as soon as possible.”

After the sentencing on Thursday, Griner was able to speak in her final statement to the court. She expressed remorse and apologized for the international incident.

“I want to apologize to my teammates, my club UMMC, the fans and the city of Ekat for my mistake that I made and the embarrassment that I brought onto them,” Griner said.