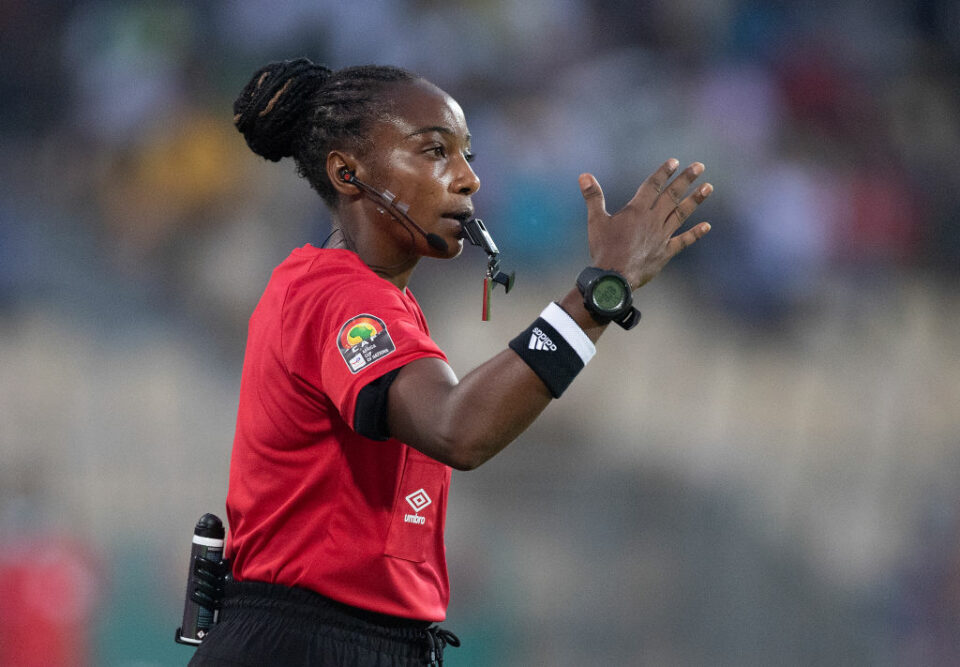 Salima Mukansanga of Rwanda in action as she becomes the first woman to referee a match at the finals of the Africa Cup of Nations during the Group B Africa Cup of Nations (CAN) 2021 match between Zimbabwe and Guinea at Stade Ahmadou Ahidjo in Yaounde on January 18, 2022. (Photo by Visionhaus/Getty Images)

This Black referee is celebrating a lot of firsts in her officiating career.

According to Republic World, among the 36 FIFA officials, Mukansanga was the fourth official during the France vs. Australia match. Mukansanga officiated the Zimbabwe vs Guinea match in AFCON prior to refereeing the FIFA World Cup 2022. In the AFCON Cup Nation’s 65-year history, Mukansanga became the first female referee to officiate a match.

BBC Sport Africa reported that this year was the first time women were selected to referee at the men’s World Cup in 92 years of the competition.

In a recent interview with the outlet, Mukansanga shared her journey as a referee and how honored she was to be selected, despite facing much rejection during the early days.

“It’s an honour and a privilege because it’s never happened before [sic],” Mukansanga told BBC.

“It means you’re going to be the first one and going to open the door for other women, especially in Africa,” she added.

“I didn’t know there is a lot to do – laws to follow, a mentality to follow, professionalism inside – but I started to learn step-by-step,” Mukansanga said.

“It was very difficult. When you are reading the laws of the game, it’s easy to understand but inside the field of play, it needs some time to have a smell for the job.”

Mukansanga is one of the first six pioneering women to officiate in a men’s global tournament, alongside Stephanie Frappart, Yoshimi Yamashita, and three other assistant referees.

“We are going to work together for the success of women. If a woman is supporting another woman, of course, you are going to see fruits. There are barriers, obstacles, and challenges. There is nothing to do about them than for us to fight with a strong mentality, commitment and full engagement – then we will overcome,” Mukansanga said.