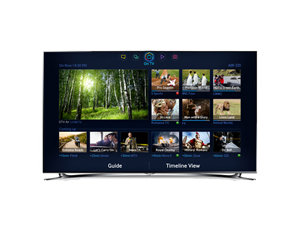 With assists from a supermodel, an NFL quarterback and a hip-hop star, Samsung showed off a 2013 class of Smart TV models featuring new content choices, refreshed interfaces and a service that suggests TV shows based on a user’s viewing habits.

The star of the event, however, was the Samsung UHD S9, an 85-inch Ultra-High Definition TV with a screen so sharp it has four times the number of pixels of a conventional 1080p HDTV. A close look revealed an image that was rich and extremely sharp with pure colors and deep blacks. The most astonishing aspect of the UHD S9, available for preorder at the end of the month, is its $40,000 price tag.

“With all of the choices that they (viewers) have, what they really want is simplicity,â€ said Joe Stinziano, executive vice president of Samsung Electronics America.

In addition to preinstalled Skype video calling software, the F8000 LED Smart TV has a pop-up webcam and a Smart Touch Remote control with an embedded microphone. A quad-core processor, a step up from the dual-core processors in 2012 models, offers more cyber muscle for sophisticated apps and for smoother videoconferencing. The F8000 LED Smart TV will also be available in other screen sizes between 46 and 75 inches.

The new F8500 Series Plasma Smart TVs use the company’s Deep Black Algorithm which, according to Samsung, provide eight times the black levels as LED TVs at the same brightness. The plasma units will be available later this year in screen sizes from 51 to 64 inches.

Standard in the new Smart TVs is a new S-Recommendation feature which can make educated programming suggestions based on users’ viewing habits. For example, if the children in a home routinely watch cartoons on Saturday mornings, the next time a viewer accesses S-Recommendation on a Saturday morning it might suggest a list of children’s shows from various live and video-on-demand sources.

Some of the new 2013 Smart TV features can be installed on some 2012 Smart TVs via a new $300 Samsung Evolution Kit. The plug-in module works with 2012-model-year 7500 and 8000 Series LED TVs and 7000 and 8000 Series plasma units. A Samsung representative said Smart TVs are generally upgradable for four years.