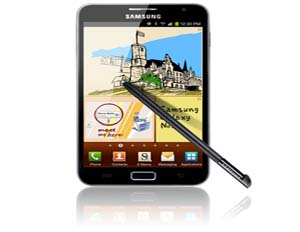 The Samsung Galaxy Note serves as a nice balance between a tablet and smartphone (Image: Samsung)

Tablet or smartphone? The Samsung Galaxy Note is enough of both to make it a powerful and useful–if not perfect–business traveling companion. It has a 5.3-inch display and comes with a stylus so you can write on it, but it also makes calls and fits into a jacket pocket.

It has barely been on sale in the US for a month, but on Thursday Samsung announced that the Galaxy Note ($300, with a two-year AT&T plan) will soon receive a fresh suite of multimedia apps for its stylus as well as an upgrade from version 2.3 of the Android operating system to Android 4.0, otherwise known as Ice Cream Sandwich, which brings with it a raft of interface improvements.

As a big smartphone, the Galaxy Note holds its own against top-tier Android phones such as the LG Nitro HD, an excellent unit in its own right with a brilliant 4.5-inch display which manages to look small next to the Galaxy Note. Like the LG unit, the Galaxy Note has a powerful 1.5-gigahertz, dual-core central processor and connects to AT&T’s ultrafast 4G LTE data network. This hardware/software combination resulted in snappy Web browsing, quick app downloads and easy e-mail access–when we could get solid connections to the AT&T 4G network, which wasn’t always the case, even in New York City.

At 5.8 by 3.3 inches, the 6.3-ounce Galaxy Note unit peeks out a shirt pocket but fits neatly into a jacket pouch. By comparison, the 4.5-ounce LG Nitro HD is downright svelte at 5.2 by 2.7 inches. Held against the ear, the Galaxy Note is a handful, but not so large as to look ridiculous. Using it with a wired or wireless Bluetooth headset makes its size less of an issue.

The Galaxy Note’s screen works well as a viewfinder for its eight-megapixel rear camera, and the two-megapixel front-facing camera makes it useful for video conferencing software such as Skype. Web pages designed for viewing on a PC were fairly readable on the Galaxy Note’s sharp 1280-by-800-pixel screen.

The S Pen, a small electronic stylus, brings unique capabilities to the device. The stylus, which stores in a hole in the back, can be used to mark up photos or documents and capture signatures–nice features for executives on the go. It also speeds up common tasks. For example, if you push the button on the stylus and swipe up, the menu at the bottom of the screen pops up.

The stylus can detect 256 pressure levels, which means that a drawing app, for example, can adjust the thickness of a line depending on how hard you press down on the stylus. The S Pen is thin, however, and those with big hands may have problems using it comfortably. A solution is Samsung’s $60 S Pen Holder Kit, which is basically a shell which snaps around the stylus to increase its size to that of a standard pen.

The Galaxy Note has been loudly trumpeted by Samsung, which took out an expensive Super Bowl ad and built huge displays for it at major trade shows. In the end, while you probably won’t be replacing your Apple iPad or Samsung Galaxy Tab with the Samsung Galaxy Note, it may be easy enough on your eyes to give you good reason to leave your tablet at home from time to time.