Did Samuel Jackson Drop the F-Bomb on SNL? 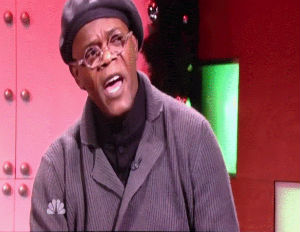 Samuel Jackson is known for his cursing, especially the f-bomb in all of its various forms.

This past weekend, Sam Jack stopped by Saturday Night Live as a “guest” on the (extremely unfunny if you ask me) recurring Keenan Thompson skit “What Up With That.”

At one point, Jackson seems to drop the f-bomb – and then just a sentence later – very clearly says bullsh*t. Thompson tried to clean it up as best he could and make a joke out it. Jackson took to his Twitter account to defend himself saying, “I only said FUH not FU$K! K was sposed to cut off da BULLSH*T, blew it!!â€ Ok, Sam.