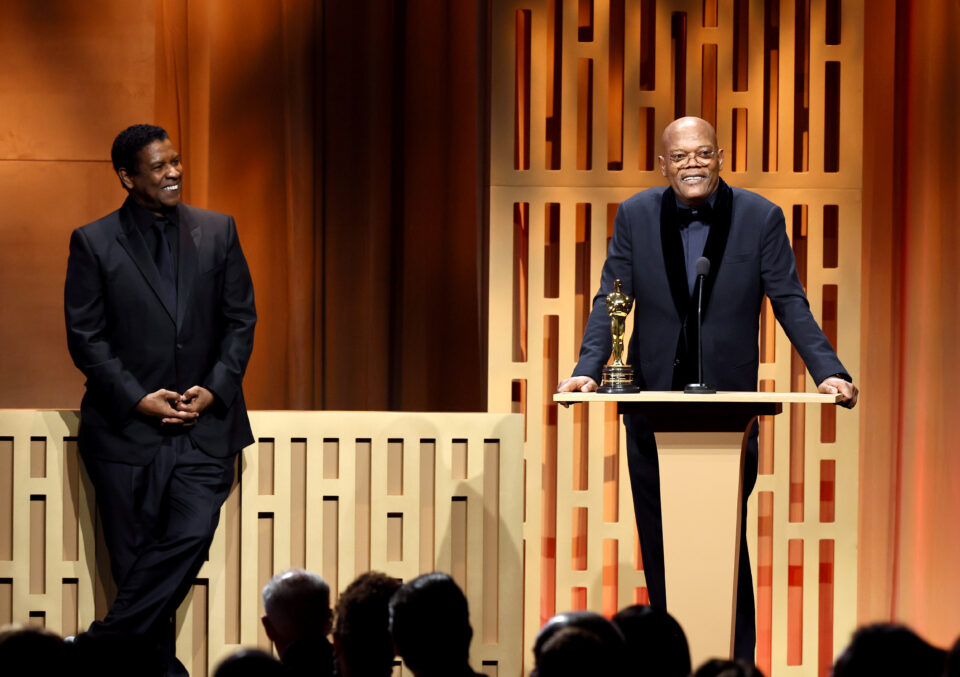 The coveted award was respectfully presented by Denzel Washington minutes before highlighting his longtime friend’s achievements and a list of charities he has worked with throughout his career. The Macbeth actor also noted Jackson’s esteemed stature as the only actor with the greatest total box office gross of all time, over $27 billion worldwide.

“Sam and I go back in the theater, the Goodman Theatre,” he shared. “We worked together even before that, at the Negro Ensemble Company. We did a pretty good play called The Soldier’s Play that became great movie, A Soldier’s Story. Wasn’t as good as it would’ve been had Sam been in it, but that’s for another day.”

Since his Hollywood debut 50 years ago, the 73-year-old has appeared in more than 150 films in his career with incredibly quotable lines moviegoers will never forget. The prolific actor is notable for his appearance in Jurassic Park (1993), Pulp Fiction (1994), Star Wars (1999-2005), Die Hard with a Vengeance (1995), Iron Man (2008), to name a few. For his infamous role in Pulp Fiction, Jackson was nominated for Best Supporting Actor at the 1995 Academy Awards.

When Jackson hit the stage, the two welcomed each other in a warm embrace. But one hug wasn’t enough, as it was clear how joyous and grateful he was to receive the honor from his friend. Jackson reached out for another hug before delivering his thank-you speech.

Upon accepting his honorary award, Jackson warmly acknowledged his long-standing friendship with Washington, noting, “We’ve come a long way and done a lot of things.” He also thanked his wife of 42 years, LaTanya Richardson Jackson.

“So I’m really, really proud to receive this statue,” he said before thanking the Governors for the recognition. “Who knows, that little kid from Chattanooga, Tennessee, watching movies, wishing he could be here to get the votes of people who run an organization like this that says, ‘Hey, I deserve something like this,’ thank you, so much.”

Meanwhile, an outcry of fans, who were delighted to see Jackson receive his recognition, would have still preferred to see him accept the award on Oscar night. Fans on Twitter who watched the moment via social media a couple of days before the Oscars were shocked and unhappy about it.

I can’t believe that The Oscars missed the easy slam dunk of presenting this live to Samuel L Jackson, probably the most well-known actor to receive an Oscar this year, and definitely one of the most well-liked actors by the general public. https://t.co/ZrdyFMPqwX

samuel l jackson is the highest-grossing actor of all time, one of the most famous and beloved faces in movies, and ABC would rather introduce a twitter-voted award than televise him getting an oscar https://t.co/Fp3E6IxIPR

Why would the Oscars want to put a beloved actor getting honored and shown love on main broadcast? That’d be smart or something https://t.co/wCgndiKiCU