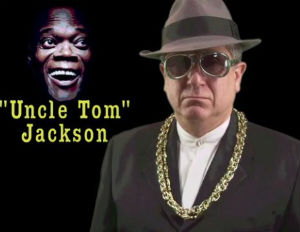 Randall Terry, a Congressional hopeful from Florida, has gotten into a bizarre back-and-forth with the actor Samuel L. Jackson over a racially inflammatory political ad, according to Mother Jones.

After Jackson’s “Wake the F*** Up!” ad that urged complacent Obama supporters to get active went viral, Terry, who is staunchly anti-abortion, responded with a hip-hop parody in which he refers to Jackson as “the new Uncle Tom” who wants to commit black genocide by aborting black babies.

“When Obama and Biden work themselves to a fit, they picked up the phone, called 9-1-holy shit. Send a man who will “Die Hard with a Vengeance” for us, and a man who will stay in the back of the bus. You’re darn right we’ll work, no you just stay calm. Get Samuel L. Jackson to play uncle Tom.”

According to Terry, Jackson’s lawyers have threatened to sue him. But under FCC rules, the candidate has broad protections of free speech rights for political ads.