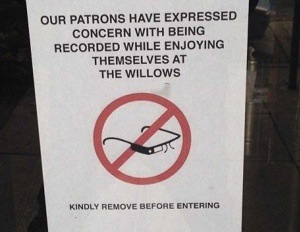 The Willows bar in San Francisco will be banning all recording devices, especially Google Glass.

Google Glass hasn’t been taken too kindly as of late, especially at bars in San Francisco. The city is already a battleground as the growing economic disparity between San Francisco natives and the influx of Silicon Valley workers continues to escalate.

The Willows bar, in San Francisco, has just banned the device from the bar in direct response to the incident at Molotov’s where a woman was assaulted for wearing one, according to Business Insider.

The photo, taken by Instagram user Broke Ass Stuart, shows that Glass specifically is being banned, though the wording seems to imply that all recording is banned in the establishment.

The news comes only weeks after Sarah Slocum, technology writer, caught the assault of her Google Glass on video, with her Glass. The incident happened in Molotov’s, a bar in San Francisco’s Lower Haight neighborhood.

The anti-Glass trend seems to be on a roll, as this is the second bar in San Francisco to ban the controversial recording dvice. Various restaurants have already expressed concerns that patrons who wear Google Glass will make other guests uncomfortable.

Google itself advised Glass users on how to behave when wearing the new technology in order to make the experience as smooth and non-intrusive as possible, to avoid being labeled colloquially as “Glass-holes.”