“For, while the tale of how we suffer, and how we are delighted, and how we may triumph is never new, it always must be heard.” -James Baldwin, Sonny’s Blues

That quote written by that renowned African American author nearly 60 years ago has been celebrated in recent days from the White House to corporate suites to the grounds of the National Mall and consumed Saturday by thousands who came to witness the dedication of the Smithsonian National Museum of African American History and Culture. In fact, President Obama used it as the preamble to his speech at the opening of the $540 million, 40,000-square-foot monument–a century-long campaign originally spurred by black Civil War veterans.

As noted by the president and so many others, the dedication came at a time that served as a powerful reminder of continued racial strife and gun violence–the latest being the shooting deaths of black men by police officers in Tulsa, Oklahoma, and Charlotte, North Carolina, a city rocked by riots last week.

Amid the revelry and pride, the museum’s opening also spurred conversations on race, the evolution of the Black Lives Matter movement, and the need for initiatives of redress, uplift, and opportunity. And that’s just what I found at activities I attended over the multi-day celebration.

I participated in an event with a much-needed focus on financial inclusion. Hosted by the US Treasury Dept., the Forum evolved from conversations between government officials and John Hope Bryant, CEO of the nonprofit Operation Hope, to provide a platform for corporate leaders, policymakers, and BE 100s CEOs to develop strategies to help close the racial wealth gap–the average net worth of African American households is $11,000 versus $141,900 for white households–and financially bolster African American households and communities.

The historical backdrop: In January, Secretary Jack Lew marked the 150th anniversary of the Freedman’s Savings and Trust Co.— President Lincoln signed its charter in 1865 to improve the financial status of the nation’s 4 million newly emancipated slaves–by naming the Treasury Annex building in Washington, D.C. the Freedman’s Bank Building.

At the Forum, TIAA CEO Roger Ferguson addressed the challenges faced by those in communities of color who jeopardized their financial futures by not adequately preparing for retirement. In fact, as part ofÂ  my one-one conversation with Lew that kicked off the event, he offered a remedy: The Treasury-produced myRA Â (my Retirement Account) as a “simple and affordable new savings option for those who don’t have access to a retirement savings plan at workâ€ made accessible through automatic paycheck withdrawals.

BE 100s CEO Rogers said public and private institutions must provide access so thatÂ more black firms can manage institutional assets. By doing so, they can grow to size and scale and, in turn, develop opportunities for other African American investors, entrepreneurs, and professionals.

I asked Lew about the fortification of black-owned banks. Despite a recent surge in deposits due to the #BankBlack movement, the numbers continue to decline from 60 such institutions 50 years ago. Lew told me that “there had been a hard 30 years” for small banks and that forging partnerships with major financial services institutions, in part, could help bolster these firms. With greater resources, black banks would be able to further fulfill their mission of spurring homeownership and entrepreneurship.

I arrived at the Gates Foundation reception held in its Washington office. Largely due to the efforts of its U.S. Programs President Allan Golston, it is listed among NMAAHC’s founding donors with a contribution of $10 million.

Much of its domestic focus is education, so support of a national African American museum is fitting. From harsh restrictions on slaves learning to read to the 1954 Brown v. Board decision to abolish segregated schools to legal challenges to higher education diversity plans today, the right for African Americans to gain educational equity has been a hard-fought, generational battle. Education has always represented the most powerful tool for African American advancement across a myriad of disciplines–business, science, technology, law, politics, the arts–and the list goes on. (The Gates Foundation is a partner of BLACK ENTERPRISE‘s BE Smart educational program.)

The function offered a poignant reminder of the tragic shooting deaths of unarmed black men. Golston asked for a moment of silence to honor Terence Crutcher, a 40-year-old black man fatally shot by a Tulsa, Oklahoma, police officer after his car broke down. Crutcher was a parent of aÂ student who attended a local KIPP Charter School. KIPP (Knowledge is Power Program), a nonprofit network of college-preparatory, public charter schools for K-12 students, is a Gates Foundation grantee. Golston encouraged attendees to read the Facebook post from KIPP CEO Richard Barth about the impact of this tragedy.

Golston then toasted the opening of the museum, sharing that the foundation’s contribution was core to its mission that “no one should be excluded from a quality education because of the color of their skin or their zip code…We want to use this national museum to continue the conversation on inequity.” 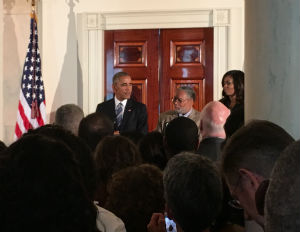 “I’m glad you and all of us are here to see this incredible moment,â€ NAAMHC founding director Lonnie G. Bunch III told me after I congratulated him for his leadership in this momentous achievement. We took theÂ time to briefly recount my interview with him on the day of the museum’s groundbreaking four-and-a-half years earlierÂ when he passionately discussed his vision to pay homage to our ancestors.

We are standing in the East Wing of the White House filled with African Americans representing the pinnacle of wealth, power, and influence. The group includes civil rights defenders such as Rev. Jesse Jackson and Al Sharpton; business powerhouses such as Radio One’s Cathy Hughes and BET Founder Bob Johnson; A-list celebrities like Oprah Winfrey and Samuel L. Jackson; and even emerging forces like DeRay Mckesson of the Black Lives Matter movement. There were so many more–a large number of whom have appeared on the pages, website, social media channels, and television shows of BLACK ENTERPRISE as members of our BE 100s, Most Powerful Corporate Executives, or Registry of Corporate Directors, or served as keynote speakers at our events.

They were all there to share in “this moment,” a testament to the historic result of the marshaling of interdisciplinary forces. It was in “this house built by slaves that the first black president acknowledged their impact, offering thanks to “the famous and the family next door.”

It is clearly an example of unified action that must be replicated in the future. 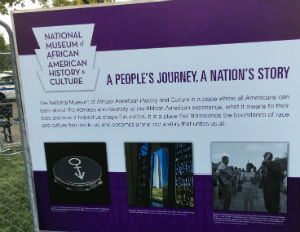 “This is history, y’all,” cries out a young woman to a group of teenagers as she quickens her pace to gain a spot on the National Mall yards away from the amazing structure designed by renowned black architects David Adjaye, Philip Freelon, and the late J. Max Bond, Jr. They came to see the 19th Smithsonian museum that rests on the five-acre site–”the only museum in the U.S. exclusively focused on African American life, history, and culture.”

It was here, for the first time, that the public would see more than 40,000 artifacts, including slave shackles; the bi-plane used to train Tuskegee Airmen; the casket of Emmett Till whose gruesome murder served to spur thousands to act during the civil rights movement; the boxing gloves of Muhammad Ali; and the fedora of Michael Jackson.

Legions arrived at Freedom Stage, one of the designated areas for spectators, some who traveled from coast to coast to bear witness to this ceremony along with the 7,000 dignitaries outside the museum. And that’s not to mention the millions worldwide that viewed the dedication on television and live stream.

Saturday’s event did not disappoint. It produced soul-stirring musical performances by Stevie Wonder and Patti LaBelle as well as appearances by Oprah Winfrey, Will Smith, Robert De Niro, and Angela Bassett, who read the words of black poets and historians.

Speakers who eloquently told of the journey that led up to the opening of this monument included many who completed the century-old mission during the last 25 year leg: Democratic Congressman and civil rights icon John Lewis, its unyielding advocate; Â Republican President George W. Bush, who signed the legislation authorizing the museum’s development; and director Lonnie Bunch and members of an advisory council of the nation’s most powerful and wealthiest African Americans co-led by American Express CEO Kenneth Chenault and Ebony Media Operations Chairman Emeritus Linda Johnson Rice who drove the Herculean fundraising and organizational efforts.

Appropriately, the ceremony closed with President and First Lady Michelle Obama and four generations of the Bonner family, descendants of slaves, ringing the Freedom Bell of the First Baptist Church to officially open the museum.

The chimes not only signaled the beginning of a new era in which the world can now view the full history of African Americans but renew candid conversations of race in America, creating a path to understanding and reconciliation.