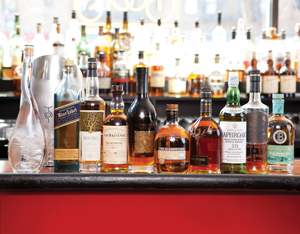 Often considered a “man’s drink,â€ the spirit of choice in professional circles and at cigar bars, or as a digestif, Scotch whisky in recent years has broadened its appeal across gender, occasion, and the global marketplace. In 2011, Scotch whisky exports increased by 23% from 2010. And while there was significant growth in exports to the U.S. and France–the No. 1 and No. 2 markets–the largest increases in demand came from Latin America and Asia. Diageo, the world’s largest producer of spirits, whose Scotch brands include Johnnie Walker, recently announced a $1.5 billion investment to increase and expand its Scotch whisky production.

Carmen Operetta, brand ambassador and mixologist, who also blogs at Libation Diaries with Carmen, is a connoisseur who believes Scotch can be enjoyed by everyone. Here she provides some guidelines to help demystify the spirit:

Know the spelling
Scotland is home to Scotch whisky and one of the few places in the world where it is spelled without an “e.â€ Operetta says, “To be called Scotch, it has to be made out of water, yeast, and malted barley; distilled at a single distillery in Scotland; and aged a minimum of three years in oak casks.â€

Know the types
Single malt is made with malted barley only; blended Scotch is a blend of whiskies distilled at more than one distillery; vatted is a blend of single malts. Other terms signify origin: Pure pot still is Irish whiskey, a mixture of malted and unmalted barley; bourbon is American whiskey made primarily from corn.

Know the regions
“Weather is pretty consistent throughout Scotland, even with the change of seasons. There are five main areas that produce Scotch, all of which offer specific traits and tasting notes. In the highlands area, there is a lot of heather. That’s one of the characteristics you can pick up in their whisky; it’s very floral. Speyside is a great introductory region for new whisky drinkers.â€ Whiskys produced there are light and elegant, says Operetta, and include brands such as Glenfiddich, Glenlivet, and Macallan. The Lowlands also provide light, malty tastes. Islay, also known as the Whisky Island, provides sea salty, smoky flavor. Bowmore and Ardbeg are among the region’s best-known brands. “Campbeltown is where you can find Springbank, the only distillery in Scotland that completes the entire production process on-site.â€ Tastes from this region include salt and peat, and the Scotch is medium- to full-bodied.

Know how to drink it
Purists tend not to mix their Scotch, says Operetta. She also believes in having the right glass, such as the Glencairn, which has a round base but tapers up to the rim. “It’s the perfect glass for nosing and drinking your whisky straight or even with water. If you’re going to add ice, then you should use a rocks glass.â€ What else should Scotch drinkers consider before they pour? “I always tell people that the best way to drink Scotch is the way you like to drink it. It depends on what you’re drinking and how mature your palate is.â€