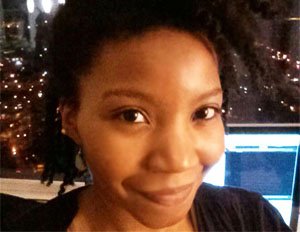 There is so much one can say (or write) about New York’s own, Catt Small (@CattSmall).

A cyber-dynamo who excels at UX Design and coding, Small helps to promote the importance of STEM, Web design, and gaming culture to the masses. Having started coding at the precocious age of 12, she upgraded her skill set and began designing sites at the age of 15.

A graduate of the School of Visual Arts with a BFA in Graphic Design, the Jill-of-all-trades manages to do a lot in a little bit of time. When she isn’t leading talks with her Brooklyn Gamery and Code Liberation crew, you can find her making video games in her spare time alongside Buttered Toast Studios and organizing events for Tech Under Thirty.

BlackEnterprise.com caught up with the busy entrepreneurial tech wizard before she started her seven-week Web game development class to talk to her about her journey as a visual artist, her thoughts on black girls coding, and diversity in the gaming industry.

Black Enterprise: How did your interest in all things Web-centric (UX, Visual Design, and Development) began? Also, can you talk about how coding and scripting language affected your relationships with your peers in your neighborhood?

Catt Small: My interest in Web development began at a very young age. My parents encouraged me to work with computers as much as possible because they knew technology was going to change the world. Around the age of 12, I became a huge anime fan and shortly after learned about Otaku World, a pseudo-social network for people who enjoyed anime.

One of the features of Otaku World was a dress-up doll program. I learned the scripting language the program used and began to draw and program my own dolls. Once I had a few finished projects hosted on Otaku World, I wanted to make my own portfolio—the coolest dress-up doll artists had links to their websites, and I wanted to be as good as they were.

Despite being heavily embedded in technology, I still managed to have a pretty positive social life as a child. I went to elementary and middle schools for talented and gifted children in Harlem, so most of the people I hung around with were also nerdy and into games. I didn’t tell people about Otaku World or the fact that I could code, though, because I didn’t think it was worth sharing. Now I realize how special my childhood experience was.

At 15, your job at 3iYing had you doing work that, today, some adults can’t even fathom. What were some lifelong lessons you learned that you’ve applied to other projects?

Presentation is incredibly important. Doing the actual design work isn’t enough. Depending on how that work is presented, your work is either applauded or ignored. Spend time thinking about how to best present your work. Write an outline and practice several times if you can. Prepare for outlandish questions, because some people might try to catch you off-guard.

Do your research. If you have data to back your decisions, clients will know you’re trustworthy. We spent a lot of time talking to young women and recording their feedback for clients. Having the voices of laypeople to back our design decisions was crucial for getting clients to change their advertising and branding.

The best work isn’t done quickly. Be patient and pay heavy attention to detail. I was a very inexperienced designer at the time, so watching others at 3iYing work taught me a lot. Sometimes people would spend five to ten minutes perfecting a single curve. I learned that it’s very important to perfect the design of anything that will be printed because physical objects are harder to erase than a website.

After receiving your bachelor’s degree in graphic design, you transitioned immediately into work at a time where others with similar merits were not able to. Can you speak to what attributes carried you into places like NASDAQ OMX and Bedrocket Media Ventures?

I’d been through four Web design internships by the time I graduated from college, so I think they saw my passion and ability to manage time well. I also worked on many side projects including a T-shirt business, freelance web design/development, and video game art. Many people go to design school because they want to make money, but I became a designer because I enjoy creating the things I think of. The visual difference between those who have a passion for their work and those who don’t is very obvious.

When I was recruited to work at NASDAQ OMX, the person in charge of hiring was very excited about the fact that I could design and code — something that was very rare at the time. Seeing that I could code, it’s very likely that they thought I might be open to trying new ways of designing for the web. I’m also pretty eccentric personality-wise: I try to be very straightforward and open about the fact that I’m awkward. I find that being honest helps people feel comfortable around me, which is important when your job is to improve the way people interact with digital products.

It’s also no secret that you’re a professed gamer. With E3 and IndieCade in people’s rearview, there’s still the huge conversation about diversity within the games industry and with games themselves. Why do you think big publishers, developers, and even some games media feel threatened with having to debate about the dearth of certain types of playable characters?

Unfortunately I think the people who design large-scale games don’t consider the lack of diversity because it’s not something they ever need to think about. The majority of those in power in the AAA games industry are white and male. Adding in characters who aren’t white and male feels like a burden. People of color and women must not be thought of as multifaceted humans — if we were, it wouldn’t be so hard to add a character who just happens to be a woman and/or a person of color.

The games industry has a lot of work to do in order to increase diversity in games, and it’s also partially up to consumers. Companies often don’t take risks because they don’t want to lose millions of dollars in sales. We need to stop buying games that follow the same formula over and over again — white male protagonist with tons of shooting, maybe some hacking, and most likely some villanous stereotypical minorities — so that AAA companies realize it’s time to be innovative.

Read on the next page, Catt Small’s thoughts about establishing herself…