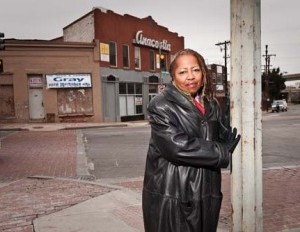 Stanice Anderson snorted heroin for the first time at the age of 19. By the time Anderson was 30, she was injecting it in her hands and neck, and she felt helpless in her efforts to stop. “I would shoot the drugs and say ‘that’s enough,’ but that little high would leave within seconds and I’d shoot some more,â€ she recalls. But her life changed when she realized she had more control over her situation than she thought.

One night in 1984, she happened to see a television program about a recovering addict. “They went through a reenactment and showed him using drugs, and all of a sudden it was like I saw myself for the first time,â€ says Anderson, who worked a series of administrative jobs during that time. In seeing this man now living a drug-free life, Anderson also saw there was a way out of her addiction.

Once she knew others had faced and won their battles, Anderson actively sought those victors out. Having started and stopped a rehabilitation program before, this time, she experienced success because she became an active member of support groups, particularly 12-step programs that provide guidelines for recovering from addiction, ongoing support from a sponsor, and a community of like-minded individuals. To stay clean, she continues to meet with those groups.

Treating addiction is a difficult and lengthy process because there is a biological component and an emotional component, says Tonya Ladipo, a licensed clinical social worker in Philadelphia. An addict’s body literally craves the drugs. “You have to deal with the physical component of detox and then you have to figure out why they are using drugs and deal with that,â€ Ladipo says. The length of time it takes someone to beat an addiction varies from person to person. As Anderson learned, a rehabilitation program may address the physical symptoms of withdrawal, such as anxiety, muscle tension, and sweating, but Ladipo adds, “You’ll have more success if you have ongoing support and accountability.â€

Today, the 60-year-old Anderson has been clean for 25 years. Based in Washington, D. C., she’s turned her life into a blueprint for others through motivational speaking and a new book titled Walking On Water When the Ground Ain’t Enuf (Shout Glory L.L.C.; $15). Along the way, she has discovered steps for overcoming addiction and other seemingly insurmountable situations. Those steps include leaning on her faith that things would ultimately work out. “I learned that faith is like a muscle,â€ says Anderson. “If you don’t use it, it will atrophy, but if you use it, it gets stronger.â€Here are 3 more steps Anderson used during her journey that you can use for your own:

Identify someone who has overcome your challenge.
Support groups and mentors can serve similar functions for those battling crises since they provide real-world inspiration that a challenge can be met, and they offer accountability in case a person starts to falter.

Share your story.
Speaking about the tragedies in her life, which included being raped as a teenager, gave Anderson an outlet for feelings she had covered up with drugs. Once she realized the rape was still causing her emotional pain and that pain was, in turn, fueling the drug addiction, she sought counseling. If necessary, start talking with one person you can trust.

Live for the small miracles along the journey.
“When you focus on the big picture, you get overwhelmed and you stop,â€ says Anderson. Instead of focusing on staying drug-free for the rest of her life, Anderson celebrated accomplishments such as getting her finances in order and rebuilding her relationship with her son. And even mundane, day-to-day tasks can help strengthen and promote the life you hope to live, says Ladipo. “Routine gives us some control,â€ Ladipo adds. “Because you think, ‘If I’m in control of this, then certainly I can figure out the rest.’â€ So as Anderson focused on the little things, the big picture took care of itself.
“When I saw glimpses of little victories, it made me bold enough to search for more,â€ says Anderson. “That meant I had to move forward.â€

From Entrepreneurial Vision to AliveLook

In the News: Libyan Refugees Flock to Neighboring Countries; Toyota Gives Away Cars for a Good Cause

FacebookTwitterYoutube
← From Entrepreneurial Vision to AliveLook ← In the News: Libyan Refugees Flock to Neighboring Countries; Toyota Gives Away Cars for a Good Cause
×