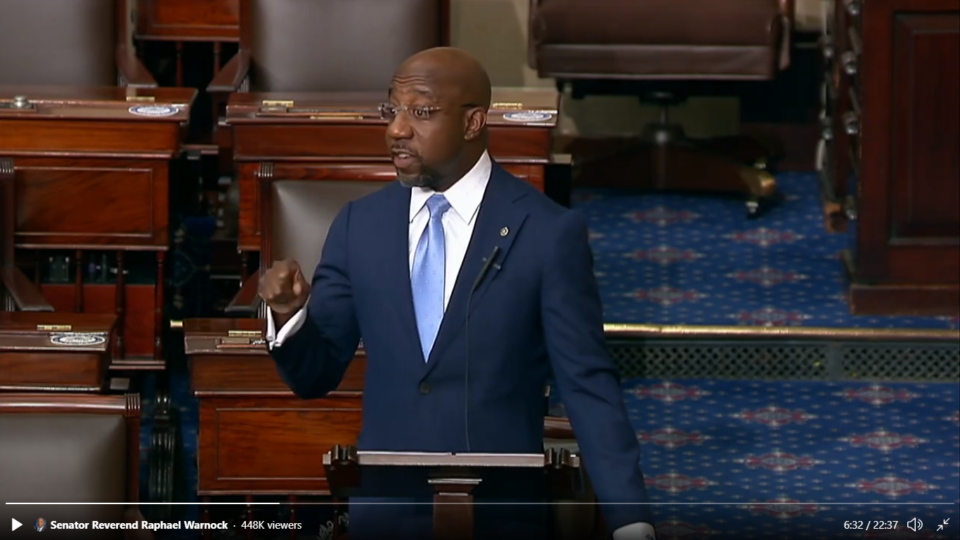 During his speech, the Georgia senator denounced what he called “voter suppression bills” moving throughout Georgia, Wisconsin, Texas, and other Republican states. The bills seek an end to no-excuse absentee voting, automatic voter registration, limit early voting on weekends, and requiring more identification to vote.

As efforts to rollback critical voting rights and protections are growing in Georgia—and nationwide—I’m speaking on the actions we can take in Congress to protect the foundation of our democracy & ensure every single voice is heard. #TheVoteIsSacred https://t.co/qzTnJxuyIW

“Ours is a land where possibility is born of Democracy,” Warnock said in his 20-minute speech. “A vote, a voice, a chance to help determine the direction of the country and one’s own destiny within it. That’s why this past November and January my mom and other citizens of Georgia grabbed hold of that possibility and turned out in record numbers. Five million in November and 4.1 million in January.”

Warnock is one of 222 co-sponsors of the For The People Act, a sweeping election reform bill, and urged Congress to pass the bill. The bill easily passed in the House but has little chance to pass the Senate. Under current rules, at least 10 Republicans will have to vote in favor of the bill.

Senate Majority Leader Chuck Schumer told the Atlanta Journal-Constitution that he will lean on Warnock to help make the case for the bills passing.

“He knows what voter suppression is like in Georgia; he knows what they’re doing now,” Schumer said, referring to a number of voting restrictions now being considered in the state Legislature. “I think he’s going to be a very persuasive voice for Democrats and Republicans to pass S. 1.”

Warnock knows how hard the fight for voting rights was for Black Americans. Warnock is a pastor at Ebenezer Baptist Church. The same church Dr. Martin Luther King Jr. co-pastored and where the late John Lewis was a parishioner.