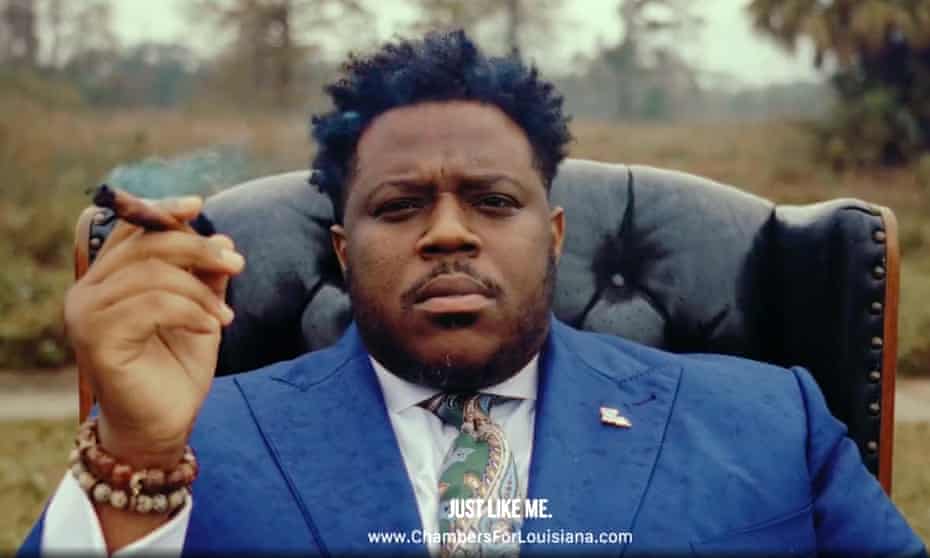 In the ad titled “Stars & Bars,” Chambers is seen in a camo jacket as he pins a Confederate flag to a clothesline and sets it on fire with a lighter.

“We hold these truths to be self-evident, that all men are created equal,” Chambers says in the ad. “But here in Louisiana and all over the South, Jim Crow never really left, and the remnants of the Confederacy remain.”

Chambers, running against Sen. John Kennedy in this year’s midterm elections, has gained national attention for his advertisements. In his first campaign ad, Chambers sat in a chair smoking marijuana in an attempt to start “a new conversation.”

The Lousiana Democrat references P.B.S Pinchback, who in 1873 won a Louisiana U.S. Senate race but was never seated as Democrats took control of the next Congress and upheld the election of his opponent.

As the flag burns, Chambers mentioned gerrymandered districts and restrictive voting laws as “byproducts” of the Confederacy, adding that the “attacks against Black people and our right to vote and participate in this democracy are methodical.”

In the aftermath of President Joe Biden’s election win, 19 states have passed 34 laws restricting voting,  including limits on mail-in and absentee ballots and making it illegal to pass out food and water in voting lines. Democrats tried twice to pass a comprehensive voting rights bill but were blocked by Republicans.

In the ad, Chambers also discussed other issues plaguing Black Americans in the South today, including access to healthcare, which has been highlighted due to the COVID-19 pandemic.

The Louisiana native added 1 in 9 Black Americans do not have health insurance, and 1 in 3 live in poverty.

“It’s time to burn what remains of the Confederacy down,” Chambers said in the video. “I do believe the South will rise again, but this time it will be on our terms.”