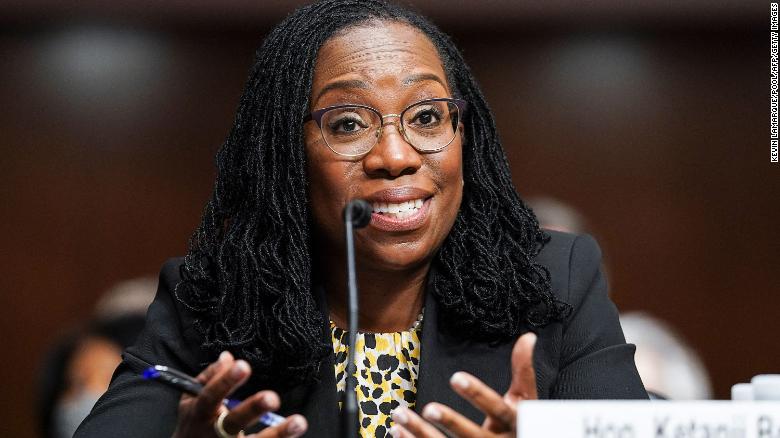 Ketanji Brown Jackson has been confirmed to the D.C. Appeals Court by the U.S. Senate. (Image: Twitter/@CNNPolitics)

The U.S. Senate confirmed the nomination of Ketanji Brown Jackson to the District of Columbia federal appeals court Monday.

Jackson, is President Joe Biden’s first nominee to the U.S. appellate courts. She received support from Republican senators Susan Collins of Maine, Lindsey Graham of South Carolina, and Lisa Murkowski of Alaska and all Democrats. Jackson will now replace Merrick Garland, who is now the U.S. attorney general.

The D.C. Appeals Court is considered the second-most powerful court in the United States. Three former members of the court, John Roberts, Clarence Thomas, and Brett Kavanaugh used it as a springboard to the Supreme Court.

Jackson is likely to be considered for the High Court if a spot opens up as one of Biden’s campaign pledges was to nominate a Black woman to the Supreme Court. Biden’s pledge has pushed progressive judicial groups to call for Justice Stephen Breyer, who Jackson clerked for, to retire and allow Biden to name a successor.

Jackson has a wealth of legal experience including serving on the U.S. District Court in D.C. since 2013 and as the vice chair of the U.S. Sentencing Commission. Jackson also  was an assistant federal public defender in D.C., experience, which is severely lacking on the High Court.

The confirmation is part of President Biden’s effort to double the number of Black women serving on the nation’s federal appeals court from four to eight and ensuring that at least one Black woman is serving on more than half of the nation’s circuit courts.

Biden has also nominated Assistant Federal Defender Eunice Lee to the New York-based appeals court and senior counsel to the Office of the Federal Public Defender for Colorado and Wyoming and Veronica Rossman, to the Denver-based U.S. Court of Appeals for the 10th Circuit.

Like Jackson, both women are on course for their nominations to be confirmed. If they’re all confirmed and none of the current Black judges retire, it will represent the largest number of Black women on appeals courts in U.S. history.

“Black women bring a perspective to the bench that is sorely missing,” Leslie Davis, CEO of the National Association of Minority & Women Owned Law Firms told USA Today. “It’s an exciting time for the president to be thinking intentionally about the need for that voice.”