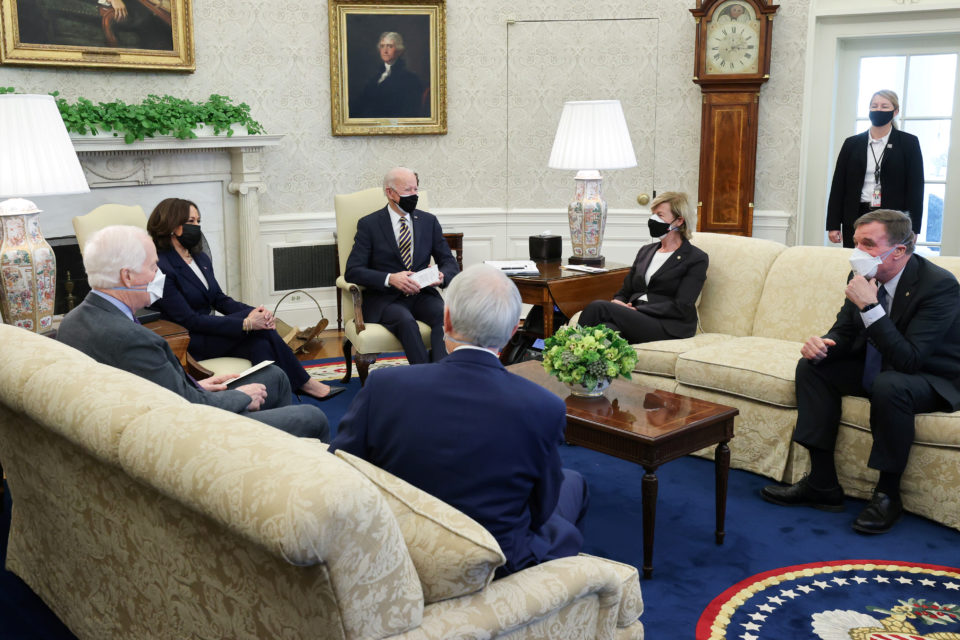 (Reuters) – U.S. Democrats, anxious for Congress to pass President Joe Biden’s $1.9 trillion COVID-19 relief bill within the next two weeks, have resolved a potential sticking point for getting the sweeping legislation through the narrowly divided Senate.

The House of Representatives narrowly approved the bill to fight the COVID pandemic and boost the economy Saturday. The action now moves to the Senate, where Democrats do not expect much, if any Republican help, even though polls indicate a majority of Americans – around 70% – favor the measure.

Over the weekend, top Democrats abandoned a controversial plan to use U.S. tax policy as an incentive for businesses to more than double the minimum wage to $15 per hour, according to a source familiar with the negotiations. The proposal would have complicated Senate passage.

Democratic Vice President Kamala Harris may have to cast a tie-breaking vote in a chamber where Republicans control 50 seats and Democrats and their allies control the other 50. Even this outcome depends on all the Democrats staying united behind the first major bill to come through Congress in the Biden administration.

“We’re moving ahead with a bill that probably will get no Republican votes in the Senate, but will have broad Republican support in the country,” Senator Chris Coons, a Democrat, said on CNN’s “State of the Union” Sunday.

Republicans in Congress say the plan is too expensive and includes things like transportation projects that have nothing to do with relief for COVID-19.

“It’s $1.9 trillion, more than half of it won’t even be spent in this calendar year … So how could it be about COVID relief? No one expects a year from now that we’ll be in the COVID crisis we are in now,” Republican Senator Rob Portman told ABC’s “This Week.”

The House-passed COVID-19 aid bill would raise the national hourly minimum wage for the first time since 2009, to $15 from $7.25. But the Senate’s rules expert said the wage hike could not be included as long as Democrats are using a maneuver that allows the coronavirus bill to pass with a simple majority, rather than the 60 votes needed to advance most legislation in the 100-seat chamber.

Democrats dropped the plan to get around this setback by using the tax code to push for a higher wage after running into a number of political and practical hurdles.

That decision resolved a potential sticking point for the legislation. While progressives want the wage increase kept in the COVID-19 bill, some moderate Democrats like Senator Joe Manchin favor a smaller increase in the minimum wage, to about $11 an hour.

Both chambers must pass the same version of the bill before sending it to Biden for signing into law. Democrats want this to happen by March 14, when enhanced unemployment benefits expire.

The measure would pay for vaccines and send a new round of aid to households, small businesses and state and local governments. The big-ticket items include $1,400 direct payments to individuals, a $400-per-week federal unemployment benefit through Aug. 29, and help for those in difficulty paying rents and home mortgages during the pandemic.

Democrats say the package is needed to fight a pandemic that has killed more than 500,000 Americans and thrown millions out of work.